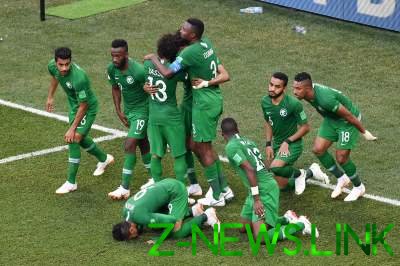 Saudi Arabia showed character in the match with Egypt and broke a long series of defeats at the world Championships.

Egypt and Saudi Arabia after the defeat of Russia and Uruguay prematurely lost chances of an exit from group, and therefore match the worst teams in the Quartet had A friendly tone.

The Egyptians efforts of Salah opened the scoring early in the match, however before the break, the Saudis at the second attempt to convert a penalty and got back in the game.
Not to mention the feat 45-year-old goalkeeper of Egypt Assama El-hadary, who not only became the oldest player in the history of world Championships, but also took a penalty.

In the second half, Saudi Arabia actively attacked and finally found the way to the gates of Egypt. In injury time, Salem al-Dawsari struck the far bottom corner of the goal and brought his team the first victory in the world Cup since June 1994.