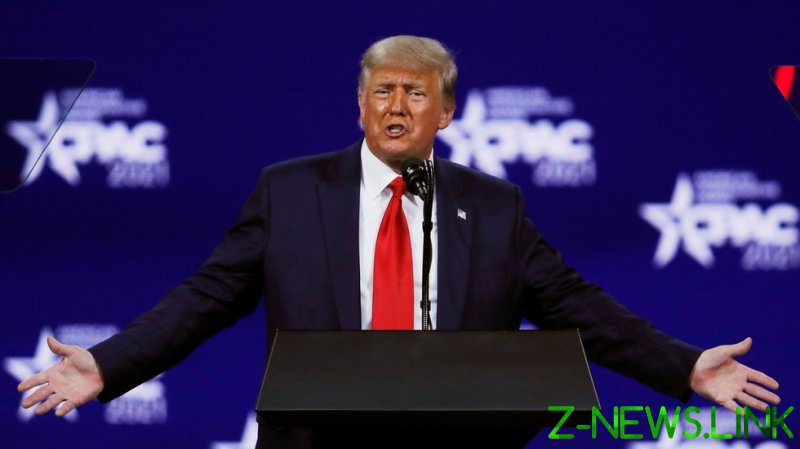 On Tuesday, RT and its German-language channel RT DE got a notice from YouTube that the video of Trump speaking at the Conservative Political Action Conference (CPAC) in Florida on Sunday was being flagged for a “strike” under the platform’s rules on “supporting the 2020 US presidential election” announced in December.

Those rules say any questioning of the 2020 US presidential elections or claims of fraud is verboten. However, YouTube explicitly says “news coverage and commentary on these issues can remain on our site if there’s sufficient education, documentary, scientific or artistic [EDSA] context.”

A live-streamed public address by a former US president is the very definition of “news coverage.” According to one estimate, over 31 million people watched in on various social media platforms.

Yet when asked for a clarification, YouTube responded that the video lacks “enough context that additionally describes and demonstrates that this is Trump’s violative CPAC speech” and that “more details and explanatory information must be provided.”

There was no answer as to how such details and explanations should be provided in a live feed that did not have a correspondent commenting, or if it would be enough to include it in the text description underneath – something RT and our video news agency Ruptly have repeatedly asked about, without ever getting a response.

After RT’s inquiry YouTube proceeded to delete the video outright, for violating its “spam, deceptive practices and scams policy.”

Meanwhile, Trump’s speech was posted on YouTube by multiple other outlets – Reuters, ABC and The Independent, for example – without any of the aforementioned “context” or disclaimers. While it’s impossible for us to know if they also got warnings or strikes, their videos are still up, so it certainly appears that RT was singled out for enforcement.

It would be one thing if YouTube demanded that anything showing what Trump says be labeled as lies, or come with a disclaimer. Admittedly, that is the behavior of a publisher and not a platform, as YouTube claims to be in order to enjoy the protections of the infamous Section 230. Singling out RT channels for enforcement, while giving Western establishment outlets a free pass, however, is far more troubling. If that is indeed the case, then the Alphabet subsidiary is telling the world it does not judge videos on the basis of their content, but on the identity of their uploader.

That this sort of discrimination is posing as YouTube’s “community guidelines” and policies aimed at “supporting” – or would that be “fortifying”? – the US presidential elections, speaks volumes about the platform, but also the state of American democracy.