What’s in your Happy Meal? Some of McDonald’s signature french fries come from potatoes grown on Bill Gates’ farmland – reports 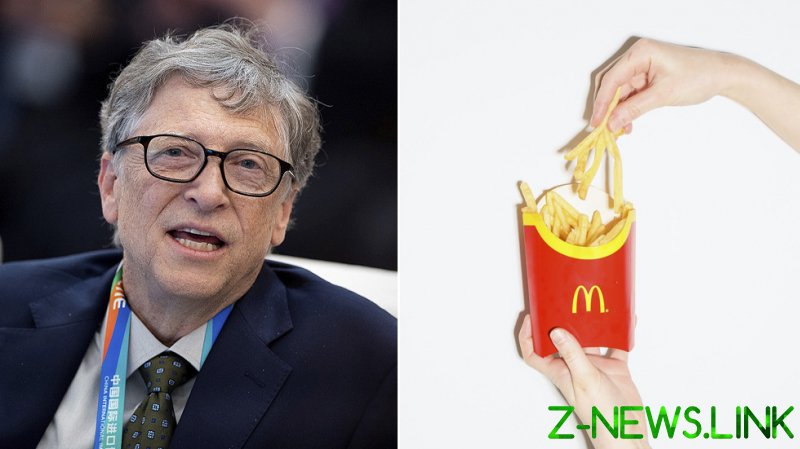 In under a decade, Gates and his ex-wife, Melinda French Gates, have quietly acquired nearly 109,000 hectares of farmland – roughly the size of Hong Kong – across 18 states in the US, according to data gathered by trade publication The Land Report and NBC News.

The potatoes used by the fast-food giant are grown on an industrial farm spread across some 5,700 hectares in Washington state. The property, named 100 Circles Farm, was purchased by the couple for $171 million in 2018, per the reports.

More specifically, it was purchased through a host of shell companies linked to their investment group, Cascade Investments, also based in Washington.

Participating in a Reddit AMA (Ask Me Anything) in March, Gates confirmed as much when he was asked about his farmland purchases, adding that they were not related to his more publicized efforts to promote climate change awareness and sustainable agriculture.

“My investment group chose to do this. It is not connected to climate,” he wrote in response before segueing into topics more related to the focus of the AMA – his new how-to guide on avoiding a climate disaster.

“The agriculture sector is important. With more productive seeds, we can avoid deforestation and help Africa deal with the climate difficulty they already face,” Gates continued.

“It is unclear how cheap biofuels can be, but if they are cheap it can solve the aviation and truck emissions,” he added, wrapping up the topic and choosing not to participate in the discussion of the ethics of private farm holding by non-farmers that ensued.

Other produce grown on farmland linked to the Gateses include soybeans, corn, cotton, onions, carrots and rice.

According to the NBC News report, there are locally registered firms in every state where the two own land with hidden links to Cascade in the form of shared addresses and occasionally even email addresses within the Bill and Melinda Gates Investment Group.

Cascade, which has been in the news recently after reports emerged about alleged toxic workplace behavior at the firm, declined to comment to NBC News regarding specific landholdings.

However, a spokesperson, Charles V. Zehren, told the publication that the firm has been “very supportive of sustainable farming.” He noted that the farmland owned by the firm has been part of a sustainability program since 2020 that audits the agricultural practices conducted on them.

According to the report, Leading Harvest – a newly-formed non-profit that markets itself online as the “vanguard of advancing sustainable agriculture” – created the sustainability program, which measures variables like soil health, biodiversity, crop quality and water management.

Among the founding members of Leading Harvest is Cottonwood Ag, one of Cascade’s subsidiaries.

According to some farmers who own lands neighboring the Gateses, however, there has been little done by way of reserving the effects of industrial farming on the environment.

Noting that he had hoped Gates would invest in new farming techniques, John S. Quarterman, a farmer in Georgia, told NBC News that “he never did anything that different from before he got here and what other farmers were doing nearby.”

However, Zehren told the publication that Cascade was indeed working to promote ecologically conscious agriculture on its holdings.