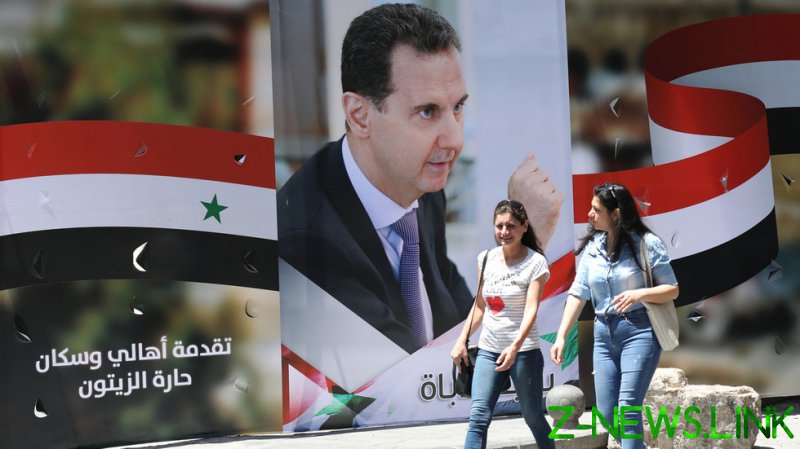 Western leaders hypocritically claimed concern for Syrians and wanted to ensure they live democratically – by funding and arming terrorists from around the world to slaughter them and destroy their homes, governmental buildings, and historic and cultural places–but continue to do everything in their power to make it difficult-to-impossible for Syrians to exercise their rights to vote for their president.

In closing Syrian embassies around the world, the regime-change alliance made very clear that they do not want the Syrian people to exercise their democratic right to vote in presidential elections past and future. They know that Syrians would come out in masses to vote for their president.

Around 2012, most embassies in Western (and Gulf) countries closed, claiming they no longer recognized the Syrian government, claiming also the Syrian government was brutally attacking peaceful, democratically-minded, protesters. Those lies convinced many that this narrative was the truthful one (unbelievably, after the lies of WMDs in Iraq and the myriad other lies that sold wars, which I wrote about on the anniversary of the war on Syria).

But it is 2021, and by now we know that this was a premeditated and cruel war on the people of Syria, spurred forth by the media who truly do not care about the lives of Syrians.

Canada was one such country to self-righteously cut ties with the Syrian government (while covertly supporting terrorism in Syria, and later supporting neo-Nazis in Ukraine) and shutter Syrian embassies.

A Toronto friend and Syrian Canadian, Lulwa Kassawat, told me that this year she again won’t be able to vote, thanks to Canada’s embassy closures.

“With elections coming up in Syria, no diplomatic representation in Canada for Syrian Canadians to vote, with more sanctions on Syria killing civilians, with illegal accusations of chemical attacks that were staged, what better way to reinforce our commitment than to stand by Syria and its people and President.

Kevork Almassian, a Syrian living in Germany, has for years been relentlessly hounded by German media for his stance in support of his army and president, even lobbying for his deportation back to Syria.

“If they succeed in deporting me before even deporting those who pose a security threat to Germany, including Islamist radicals who committed crimes in Germany, it’s a dangerous precedent. It’s essentially telling Syrians: shut up, don’t speak positively about your government. My case is very well known in Germany. Most pro-govt Syrians in Germany know me, because of the media campaign against me. Because of what has happened to me, many Syrians are afraid to go to demonstrations or to vote.”

In the past two years, Almassian was chased, smeared, harassed and even physically attacked multiple times by the sympathizers of the Free Syrian Army (FSA) and other terrorist groups. These attacks came after a smear campaign by the German media and Turkish-Qatari funded outlets.

“The media is against patriotic Syrians, as is the government and most political parties. They portray the people who are with Assad as fascists.”

For Syrian refugees in Germany, there are more factors than potential smears or assaults that could deter them from voting. Not having official refugee status (they have subsidiary protection), according to German law, if the war stops (or the German government changes its mind), they risk being deported back to Syria–even if they have a work permit or are studying at university.

In 2014, although the Syrian embassy was open, the German government banned Syrians in Germany from voting. Police at embassies blocked people from entering to vote. Syrians did come to the embassy to vote, but police wouldn’t allow them in.

This year, the German government also banned the Syrian community from voting.

“Just as in 2014, the closure of Syrian embassies makes it very hard for many millions of Syrians around the world to express their voices in what most countries around the world consider not just a right, but a duty. This year, as in 2014, many Syrians who can afford to must endure travel costs and travel to Syria if they wish to exercise their voting rights.”

Indeed, in 2014, Syrians flew from around the world to Damascus simply to vote, as the countries they reside in had closed their embassies.

In Lebanon, where I was at the time, the voter turnout was astonishing, with the embassy opening an unscheduled second day, to accommodate all the Syrians who came to vote.

As I wrote then, “Syrians crammed in one of an endless stream of buses, exited and continued on foot. The masses opted to walk the remaining few kilometres rather than sit in a traffic jam generated by the tens of thousands flocking to vote.”

I walked with them and spent the better part of the afternoon speaking with Syrians about why they’d come to vote.

In spite of the second day of voting, there were still many Syrians in Lebanon who, because they hadn’t been able to vote, headed for the border crossing to try to vote in Syria.

What many may not be aware of is that at the time of the 2014 presidential elections, Syrians in Syria braved terrorist bombings while going to the voting stations.

“Syria’s official news agency SANA reported on Saturday that at least 39 people had lost their lives in the mortar attack on the election campaign rally in Syria’s southern city of Dara’a late on Thursday.

“According to the report, some 205 people were also wounded in the attack, while 14 of the injured are in critical condition.”

Even before voting day, terrorists heavily shelled cities around the country in areas not under their control, in an attempt to intimidate Syrians from casting votes the following week.

“Twenty people have been killed in mortar attacks carried out by foreign-backed militants on Syria’s northwestern city of Aleppo.

“Takfiri groups have stepped up their attacks against Syrians in several cities and towns as the country prepares for the presidential election on June 3.”

And, as I wrote a month later, in increased shelling, largely seen as vindictive attacks on Inauguration Day, July 16, terrorists fired 23 shells on Damascus. Syrian State media reported that four were killed and 30 injured by the mortars which targeted Shaalan district, Umayyad Square, and a park near the Sheraton Hotel.

After 14 visits to Syria over the years, some for months at a time, I can say in all honesty that Syrians overwhelmingly stand with their president and army.  Western and Gulf corporate and state-owned media would have people believe differently, but that is because they want to overthrow the president and install a puppet government favourable to their, and Israel’s, interests.

But the polls show it as well. In the 2014 election, President Assad, “won with 88.7 percent, garnering 10,319,723 votes. According to Syria’s supreme constitutional court, 73.42 percent of some 15.8 million eligible voters took part in the elections.”

Journalist Sharmine Narwani at the time noted the cynicism of Western nations and media regarding this outcome, writing:

“Syria’s foes will go to the wall with claims of fraudulent votes, but they can hardly contest the visuals of millions of Syrians casting them.

“Which is why Western ‘democracies’ and many Arab allies have sought to inhibit the democratic process by obstructing Syrians from voting at their embassies. It is embarrassing for them then that thousands of Syrian refugees have crossed the Lebanese border to vote (Lebanon initially threatened they would not be able to return), and that Syrians from the United States, Kuwait, UAE, France, the Netherlands and elsewhere have chartered flights to Damascus so their votes can be counted.”

Likewise, I foresee more of such Western cynicism if, as expected, Assad wins this year’s elections.

But, that is just a case of sour grapes. The West lost their regime-change project.

It gives me consolation that, unlike in 2014, this year terrorists won’t be able to bomb most Syrian cities as they have been forced out in the intervening years, and peace has returned to areas they once occupied.

While Syrians struggle unbearably under the cruel and sadistic Western sanctions that strangle them, there is at least hope that in the future, more nations will normalize relations with the country. Perhaps then, America and Co will toss in the hat and retreat to lick their wounds, letting Syrians finally live in peace.

After his recent visit to Syria, Johnny Achi told me, “When I was in Syria I met with some high ranking officials that assured me that by next year, around this time, dozens of embassies will re-open in Syria and full diplomatic ties will be restored between Syria and many of the boycotting nations including many Europeans.”

Syrians voting in the upcoming elections will be, as in 2014, voting in defiance of the attempts of America and her allies to overthrow their government. And it will be a momentous occasion marking Syria’s victory in the brutal and completely unnecessary 10-year war.