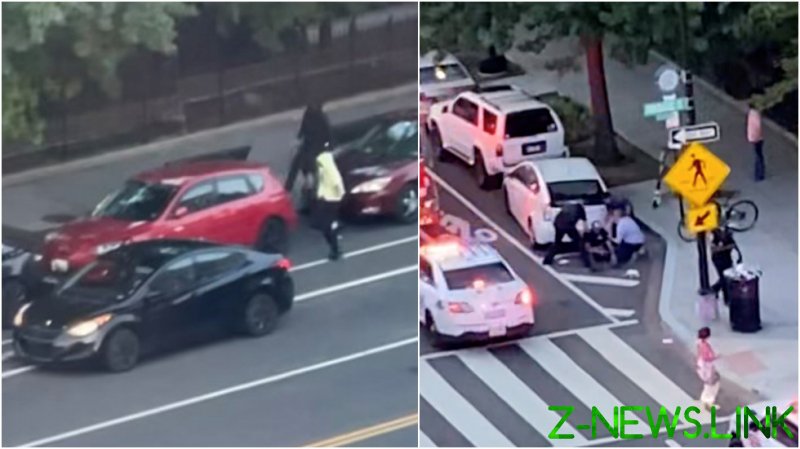 Briefing reporters on a brazen daytime shooting in an upscale DC district the day prior, Metropolitan Police chief Robert Contee decried an “unacceptable” wave of violence gripping some of the city’s neighborhoods, arguing that a dysfunctional court system is failing to keep dangerous offenders off the streets.

“We could take the political route and talk about all of this fluffy stuff, but I’m going to give it to you straight, where the issues are,” he said at the Friday presser.

Two men were injured in Thursday’s gunfire, which saw more than 10 shots ring out on DC’s 14th Street. Police said the victims were “conscious and breathing” soon after the incident, though offered few other details about their condition. Law enforcement also released footage of the suspected shooter and one accomplice, who fled the scene in a dark, four-door car, asking the public to help identify them. They remain at large.

Contee fumed that Thursday’s shooting only garnered media attention due to its location near the high-end Le Diplomate restaurant, suggesting the press often ignores violence in other neighborhoods. He pointed to 922 shootings and 198 homicides tallied in DC in 2020, a 16-year high, saying such violence “should be shocking to the conscience of every person in our city” and has “been happening for a long time.”

“This is what the response should look like. It should look like this,” he said, gesturing toward the crowd of reporters around him. “Because there are a lot of corners I go to after a murder has occurred, and it’s just me, it’s just the officers.”

When you hear the gunshots in your community, that begs a different reaction.

Contee added that a large backlog of cases involving violent criminals from 2020 had “not been disposed of” due to delays caused by Covid-19, asking “Where do you think those individuals are? Anybody want to take a guess? They’re in the community.”

“Why is it that a guy who murdered somebody is out in the community after having been arrested two or three months prior with a firearm? What did we think he was going to do?” he went on, apparently referring to another case. “We want to help people, yes we should, but you cannot coddle violent criminals.”

Courts in the city put jury trials on pause for much of the health crisis, with the DC Superior Court halting them for a full year, only resuming in late March. In the meantime, police continued to make arrests, but if prosecutors brought charges, suspects were often released under some level of supervision as their cases crawled through the system. The delays resulted in “hundreds” of backlogged cases, according to the Washington Post.

There has also been a flipside to the judicial gridlock, however, seeing some defendants languish in custody well beyond their ultimate sentences as they await trial. Meanwhile, as of Wednesday, the nation’s capital had recorded 105 homicides so far in 2021, keeping pace with last year’s decade-and-a-half high.