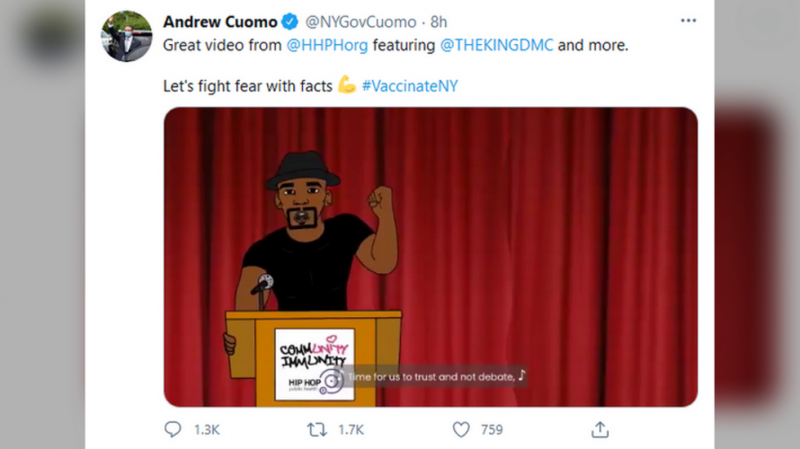 Cuomo tweeted the cartoon on Thursday, calling it a “great video” and saying, “Let’s fight fear with facts.” The video features 1980s rap star Darryl “DMC” McDaniels, formerly of Run-DMC, telling his audience to take the vaccine so “we can get back to normal.”

The song repeatedly urges listeners to trust in the safety of the Covid-19 vaccines, saying, “If Doc says it’s good, then trust me it’s good,” and “Time for us to trust and not debate the vaccine, believe it’s safe to take.” And contrary to Cuomo’s line about fighting fear with facts, the video features a giant virus droplet chasing a black man down the street as the rapper says, “This Covid thing is real, and it will find you. It’s killing our people, let me remind you.”

Conservative activist Rod Smith, who is black, called the video “pathetic and offensive,” saying that it reflects the view of white liberals that black people are stupid. “Can you imagine for one moment if a conservative or Republican politician decided to get local rappers and to make rapping cartoon characters into a PSA to try to get black people to take a coronavirus vaccine?” Smith asked. “The woke left’s minds and their brains would totally explode because of this. But because this is Governor Cuomo, because this is a liberal, then he’s going to get away with it.”

But the video was widely panned by observers of varying politics and skin colors. One commenter called it “disrespectful” and asked,“Are y’all making a country or pop version for white people?”

Another Twitter user assailed the quality of the production, saying, “This is hands-down the cringiest animation since Poochie told us to recycle.”

Musician R. Tyrane Tallie argued that the “unreal levels of pandering” in the video would cause black people who trusted the inoculations to question whether they should trust the vaccines. Another commenter asked whether Cuomo has a “snappy cartoon rap about not committing genocide against the elderly,”alluding to the governor’s decision to force nursing homes to accept patients infected with Covid-19. “Asking for my grandmother.”

A self-described feminist and Black Lives Matter supporter suggested that the video failed to address the real safety concerns that many black people have about the Covid-19 shots. “Did you actually sit down with black folks and see why we’re worried about vaccines, or just jumped straight to black stereotypes?” he asked.

New York has been among the bottom one-third of US states in terms of its Covid-19 vaccine rollout. Just 9.6 percent of New Yorkers had received at least one vaccine dose as of Thursday, ranking ahead of just 15 other states, according to CDC data.