Ukraine gaining access to NATO’s waiting room ‘remains to be seen’ says Biden, after Kiev’s Zelensky claimed it was ‘confirmed’ 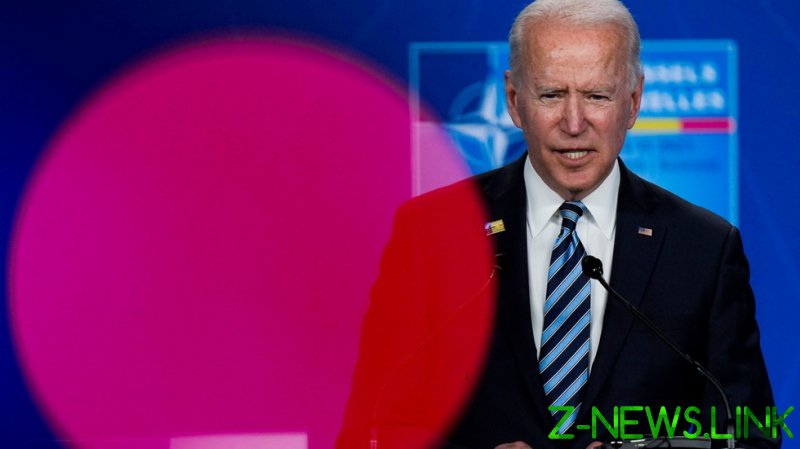 “NATO leaders confirmed that [Ukraine] will become a member of the Alliance & the MAP is an integral part of the membership process,” Zelensky tweeted on Monday afternoon, as leaders of the military bloc met in Brussels. Ukraine “deserves due appreciation of its role in ensuring Euro-Atlantic security,” he added.

MAP is a reference to the Membership Action Plan, a NATO program established in 1999, when the American-led alliance began its eastward expansion.

However, Ukraine’s status “depends on whether they meet the criteria. The fact is they have to meet the criteria to join MAP,” Biden told reporters shortly after Zelensky’s tweet was published.

“School’s out on that question, it remains to be seen,” Biden added. “They have more to do.”

Zelensky’s tweet followed the publication of an interview he jointly gave to Reuters, AP and AFP, in which Ukraine’s president said he would “really like” to get some specifics and a “yes or no” answer from Biden on Kiev’s membership prospects.

“We must get clear dates and the likelihood of this for Ukraine,” he told the agencies.

However, the NATO summit has given far more attention to China and climate change. Secretary-General Jens Stoltenberg mentioned Ukraine only twice in his remarks to the press after the summit – and neither time in the context of the MAP.

“We stand in solidarity with our valued partners Ukraine and Georgia. And we will continue to support their reforms, bringing them closer to NATO,” Stoltenberg had said early on in his remarks, noting later that the alliance will “substantially step up training and capacity-building for partners. From Ukraine and Georgia to Iraq and Jordan.”

Last week, US officials were quick to intervene when Ukraine published a readout of Zelensky’s phone call with Biden that claimed the US president had endorsed a MAP for Kiev’s NATO membership.

“The Ukrainians mischaracterized the statement and corrected the record,” a National Security Council spokesperson told Axios last Tuesday. The subject never actually came up, according to the publication. By Monday evening, the Ukrainians had amended their readout to remove the disputed reference.

In the interview, Zelensky complained that Ukraine is more ready to be a NATO member than “most of the countries of the European Union,” and that those in Washington and Brussels demanding more internal reforms should be “more flexible” because Ukraine is “at war” and “defending democracy in Europe.”

The MAP program was inspired by the entry of Czechia, Hungary and Poland into NATO in 1999. All but one of the MAP member countries have since joined the alliance, though North Macedonia had to wait for 21 years, and Montenegro for 18. Its only member currently is Bosnia-Herzegovina, invited in 2010, whose NATO membership is unlikely in the near future due to unresolved internal issues.