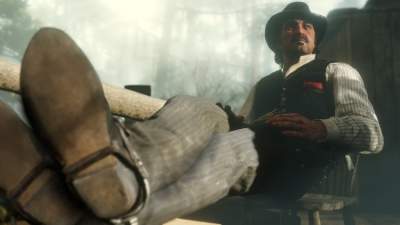 Appropriate changes Rockstar Games made in the fall.

It seems that the question “downgrade” the graphics will bother some gamers always. And resentment is not only the apparent discrepancy between the release version and the early trailers, like in Crackdown 3, but thin, not conspicuous deterioration. For example, this week the players made a fuss on Reddit for pale pictures Red Dead Redemption 2, although, as it turned out, the appropriate changes Rockstar Games made in the fall.

The deterioration indicated a Twitter user under the nickname Darealbandicoot. He published screenshots of the same scene taken at different versions of the game – 1.00, and 1.06 (the latest). As you can see, the image on the right the shadows are not so deep, dark colors are less saturated, and overall it looks not so contrasting. All because the developers have disabled the ambient occlusion technique with realistic lighting, changing the light intensity depending on, whether the rays intersect with other objects. For clarity, the users make a GIF with these pictures.

Later Darealbandicoot published a few pairs of screenshots, one of them was from version 1.03. It is easy to see the lack of some shadows and the overall paleness of the picture. The players came to the conclusion that the graphics downgraded even before the last patch.

A Reddit user under the pseudonym gmdagdbc drew attention to the fact that downgrade spoke at the beginning of December. Even then, the players published comparative shots on the GTA Forums (on a few due to the vanished shadow it looks like the tram is floating in the air). Thus, they agreed that all the fault of patch 1.03, released on 27 Nov (a month after the premiere). He brought the support of Red Dead Online and, as claimed by the developers, improved performance and General stability, and fixed many bugs. Some, however, and then complained that the “vanilla” version load faster and change the weather is not as fast.

No mention of changing the lighting system in the notes to the last update, players have not found. Employee DualShockers Contaldi Lou (Lou Contaldi) suggested that changes could be associated with the difference in time of day and weather conditions, but gamers continue to blame the updates. Some advised to disable Network access to reinstall the game from disk and disable the download of patches (this applies to both PlayStation 4 and Xbox One).

Meanwhile, beta testing continues Red Dead Online, which, according to the head of Take-Two Interactive of Strauss Zelnick (Strauss Zelnick), has started even better Grand Theft Auto Online in terms of engagement (engagement) of the users. The online component receives regular updates – the last one added new costumes and accessories that will be available for a limited time, and the competitive mode Spoils of War. About the time the full release is not reported.