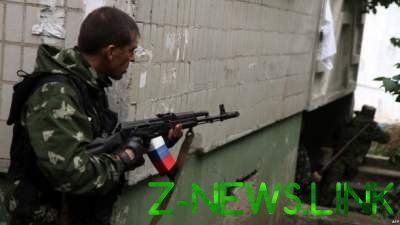 Russian journalists, who were assigned to prepare materials “about the gross failure of the truce by the Ukrainian troops”.

Invaders in the Donbas are preparing for the accusations of the Ukrainian Armed forces of disrupting the truce. For this to Gorlovka and Donetsk there arrived the Russian journalists, who were assigned to prepare materials “about the gross failure of the truce by the Ukrainian troops”. And the militants are reinforcing their positions.

During the holidays in several parts and divisions of the “1 St of AK DNR” orders of commanders cancelled the dismissal in the period from 1 to 8 January 2018, which caused extreme discontent among the militants. Command explains the prohibition on dismissal “ready APU under cover of the truce to go on the offensive,” according to “Information resistance”.

Enemy activity noted at the site from Monitoring to the White stove, where the Russian command for some reason expects promotion APU forward. Fixed setting the occupiers of additional minefields in the area of the height 206.9 and South of Petrovsky, the gain on this sector units of the invaders for more armored vehicles. In addition, there is a growing invaders in this area reconnaissance the front edge of the Mat.

Against journalists, mostly from Russia arrived about 30 people. Identified the crew of TV channel “Russia 24” and “ORT”.

“In connection with these “preparatory activities”, in the new year and Christmas holidays are excluded the armed action on the part of the occupation forces to provoke on the APU opening return fire with accusations of “disrupting the truce”, – is spoken in the message.

I should add that only in Gorlovka occupants are actively camouflage heavy equipment. Managed to capture about 15 tanks North of the city on the territory of the Central processing plant “Uzlovskaya”.