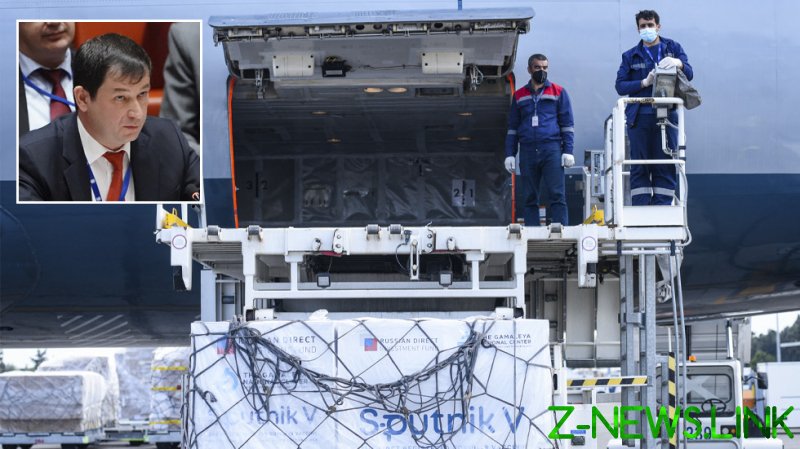 Russia’s First Deputy Permanent Representative to the United Nations Dmitry Polyanskiy told RT in an exclusive interview that it is “a challenging and dangerous time we are living through right now.” Recent weeks have seen Washington impose sanctions against Moscow for alleged interference in the 2020 US presidential election, and the Czech Republic moved to expel Russian diplomats over claims the country’s spies were behind a 2014 blast at an ammo dump. The Kremlin has denied both sets of allegations.

However, the envoy said reconciliation is possible. “We are ready for dialogue. We are ready to come to certain common understandings, but we think that for such a task, everybody should be treated as equal…and of course we are against any meddling into the internal affairs of other countries.”

“We are sorry to say that not everybody shares this approach,” Polyanskiy added. “Unfortunately, some of our Western partners would prefer to lecture Russia, to lecture China and to lecture others. This is all very much aggravated by the ‘megaphone diplomacy,’ this trend is seen very well right now and is complicated by the fact we are living in the post-truth world when nobody pays attention to what is really happening and there are a lot of sources who present information in a distorted way, which is very often quite far from reality.” All these factors, the UN diplomat said, “bring us to a very dangerous moment in international relations.”

The end of the Trump era

Former President Donald Trump was consistently portrayed in American media as influenced by the Kremlin, or even, according to some dubious reports, a potential Russian asset. However, during his time in office, the one-term Republican oversaw the most significant deteriorations in ties between the two countries in recent history, with unpredictable and sometimes contradictory rhetoric from the White House dashing hopes of a thaw.

Polyanskiy revealed that since President Joe Biden took office Moscow’s diplomats feel there has been something of a return to business as usual. “We know that a lot of figures in the current administration are indeed professionals with big diplomatic experience. It’s not always important to agree with one another, we understand that there are divergences, but we need dialogue full of respect and with the basic principles of diplomacy,” he said.

“Sometimes we lacked this with the Trump administration, some figures there were a little bit eccentric or too political and it was very difficult to understand what they were really after,” Polyanskiy added. “We of course take into consideration the fact that there was a very difficult moment for President Trump and his associates who were criticized or even punished for a simple desire to mend relations and enter into dialogue with Russia.” For attempting to pursue better relations, the diplomat said, “they were immediately accused of high treason, they were prosecuted and some of them lost their positions.”

With us, or against us

While Biden’s diplomatic representatives might be more polished and professional than his predecessor’s, in Moscow’s eyes his team had exposed its policy on the country ahead of time by turning Trump’s sometimes warm words into a political attack line. “We know that the leaders of the current administration sometimes were behind these kinds of accusations,” Polyanskiy said, “so of course it would be very naive to think that from the moment of inauguration we would deal with friendly people ready to take on board our pre-occupations and pre-occupations of others.”

A return to more predictable relations, the envoy believes, is far from a sign that it is ready for constructive dialogue. “It is absolutely clear that the administration is behaving in a way like the US is a kind of ‘shining city on a hill’ and everybody is looking there with awe and a desire to do whatever the US wishes,” he said. “That is the only perception that they acknowledge among other members of the international community – either you are with us or against us.

So it happens that they see Russia and China as rivals and that’s why their efforts are very clearly aimed at containment of Russia and China, as they put it of our ‘malicious influence,’ ‘destruction’ and ‘propaganda.’”

Diplomacy by invitation only

Earlier this month, the G7 group of nations met in London for one of the first major summits since the beginning of the pandemic. Major political and economic players on the world stage including the US, UK, Germany and France are represented, as well as nations sometimes less prominent in international affairs – Italy and Canada. The European Union is also a member of the exclusive club, adding an eighth chair around the table.

In a lengthy document issued after the head-to-head concluded, these countries’ foreign ministers declared that Russia is engaging in efforts to undermine Western democracies, while China is throwing its economic might around to bully and pressure other states.

Neither the world’s largest country, nor its most populous, was there to answer the charges. Moscow had its ticket torn up in 2014 as part of a US-led political response to the reabsorption of Crimea, while China has never been a part of the group.

“We aren’t against such meetings,” Polyanskiy said. “Countries can meet in whatever configurations and constellations they like, if they are glad to see each other, why not?

But what is the real added value of such meetings? If they want to pronounce very pleasant things for each other, that is one scenario. But if they really want to influence world processes, it is absolutely clear that without engagement of and finding common ground with all the key players – Russia and China, and some others as well – these efforts will be in vain and they will lead exactly to the formation of closed clubs that pronounce pleasant things for each other, but their real influence and effectiveness will be very questionable.”

“That’s totally clear about the G7 club, it has lost its importance many years ago,” he added. “Maybe it is a very sexy toy in the hands of our Western colleagues but nothing more than this. That’s why we’re quite calm toward such efforts. They do not reflect the real position in the world or the majority of members of the international community.”

However, Polyanskiy rejected the notion that Russia was isolated on the international stage. “We feel that many countries, big or small, who consider themselves to be part of this Western club behave very arrogantly to us and try to underscore what the US is promoting in the world about Russia, about our ‘malicious intentions,’ our alleged destructive behavior and actions,” he claimed. “But this is not the end of the world, and it is not the majority of the international community.”

Taking jabs at each other

One area where Russia and its intentions have been in the news most recently is in the response to the coronavirus pandemic. The country has been accused of deploying Sputnik V, its flagship vaccine, as a sharp-tipped political weapon, with a number of regulators, including the EU’s, holding up approvals. Given the go-ahead for use in 65 countries already, it is fair to say that some governments have been warier about placing orders than others.

“Unfortunately, there is such a thing as Covid diplomacy,” Polyanskiy said. “This is not our choice…Covid-19 is a problem affecting everybody. Our countries are in very different situations, that’s why we viewed this from the beginning and continue to view right now that we need to combine efforts, put aside any differences and commercial interests. We need to work together to ensure the world comes back to normal as soon as possible.”

According to the envoy, Moscow doesn’t “seek to get any specific advantage in this regard or use it as a tool of Russian influence. We just think that we have a very efficient vaccine which is quite popular and in big demand. So what is so bad for us to promote this vaccine and to offer it to other countries which are ready to get this vaccine?”

“What we do not accept, and what we really think is shameful behavior is when somebody tries to block such cooperation for political grounds,” Polyanskiy added. “When somebody is trying to claim that Russian motivations are a priori political and the acceptance or non-acceptance of a Russian vaccine would be criteria or a kind of quality mark for the country – whether it belongs to the forces of Evil or the forces of Good… This is very deplorable and unfortunately we see such efforts.”

The UN representative pointed to a recent admission in the annual report of the US Department of Health and Human Services (HHS) that officials were engaging in efforts to ostracize the Russian jab. As part of the self-appraisal of the department’s successes in 2020, the department confirmed that its international team, the Office of Global Affairs (OGA), “used diplomatic relations in the Americas region to mitigate efforts by states, including Cuba, Venezuela, and Russia, who are working to increase their influence in the region to the detriment of US safety and security.”

These efforts, it said, culminated in “using OGA’s Health Attaché office to persuade Brazil to reject the Russian Covid-19 vaccine.”

“We see our constructive, open-minded and heartfelt efforts are blocked under the pretext that allegedly we have some calculations behind them,” Polyanskiy claimed. “And this is a shameful situation, it is shameful for the US, it is shameful for the EU, which is again applying clear double standards to Sputnik V and toward cooperation with Russia against the will of common Europeans and the scientific data about Sputnik V and other vaccines.”

The EU’s central regulator, the European Medicines Agency, is still conducting a months-long rolling review of the evidence behind the vaccine made by Moscow’s Gamaleya Institute. That is despite many member states expressing disquiet over the pace of the bloc’s immunization program.

Hungary, which has recorded close to 30,000 deaths from the virus, has jumped the gun and begun using Sputnik V without waiting for the green light from Brussels. The country’s Prime Minister Viktor Orban said in January that “what I need, and what the Hungarian people need, is not an explanation but a vaccine, and if it is not coming from Brussels, then it must come from elsewhere.” He added that “it cannot be that Hungarian people are dying because vaccine procurement in Brussels is slow.”

Polyanskiy was, however, optimistic about the prospects for the future. “It’s not too late, I think we still have to put aside all the divergencies. We appeal to our European colleagues and our American colleagues to change these optics and to work on these Covid-19 issues against a background of common interest – common interest of the whole of humanity, common interest of developing countries – and not to apply any double standards and to engage in constructive ways. We’ve still got time and we have to do it without any delay.”

For now though, given the troubling state of relations between the West and Russia, it is likely that accusations Russia is using the pandemic to gain political influence around the world will continue, while the death toll creeps higher and higher. Whether anything can break this deadlock remains to be seen.