The electric Tesla Model S topped the rating of used cars on the American market.

Used cars Tesla Model S are in high demand compared to similar luxury cars. Despite the high price, the Model S sold faster than its competitors for more than a week. This is stated in a joint study by Automotive research company (Automotive research firm), and search engines for cars iSeeCars.

Experts analyzed the 6.1 million sales of used cars from April 2018 to March 2019, considered a used car 2016-2018. The model Tesla Model S compared with nine other similar large sedans luxury. For each model, it was estimated the number of days during which each vehicle was sold at iSeeCars, as well as its average price. In addition, it has been calculated for each model the number of cars that were sold at a price 10% or more below market value.

As a result it was estimated that the Tesla Model S sold an average of 35.5 days, that is by 24.2% faster than its competitors.

Average price for used Tesla Model S is $68 to 159, which allowed the car to take fourth place.

“Despite the fact that the offer of used Teslas are still relatively low, it is steadily growing, as more and more cars are rented, which can lead to the fact that dealers will be more competitive in their prices. And such transactions probably contribute to the reduction of the time of sale,” said CEO of iSeeCars Fong Lee.

While the price of the Model S puts it in the same class with luxury vehicles, the automaker calls himself a “sedan of premium-class”. Thus, the car lacks the refinement of its luxurious counterparts. The Model S features a minimalist interior and lack of features, familiar to luxury brands, for example, cooling and massage seats. But, as noted by iSeeCars CEO Phong Lee, “the rapid sales of the Model S shows that its customers appreciate the innovation of Tesla and are willing to sacrifice amenities available in luxury cars, in favor of advanced technologies”. 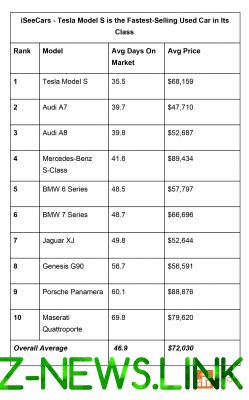