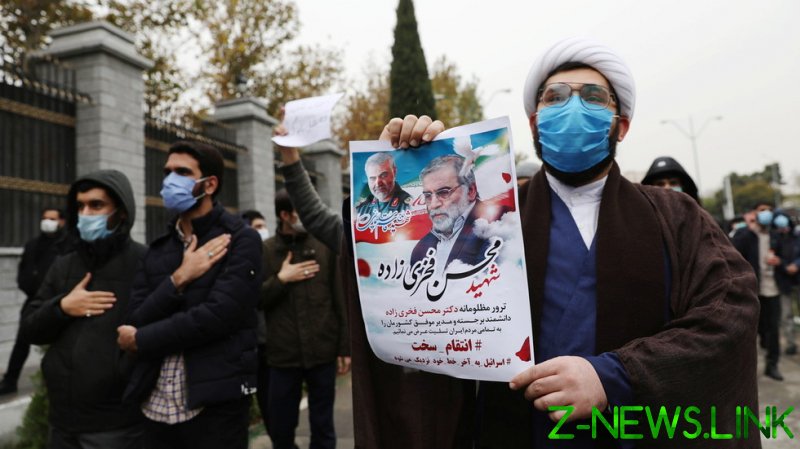 Syria’s Foreign Minister Faysal Mikdad denounced what he called a “cowardly act” in a phone call with his Iranian colleague, Javad Zarif. Offering his nation’s condolences to Iran over the incident, Mikdad said that the murder was an attack against scientists and researchers in all parts of the world.

While Mohsen Fakhrizadeh was a senior Iranian nuclear physicist with alleged close connections to the defense industry, the Syrian minister praised his efforts in “advancing science and knowledge.” Earlier, Iran’s UN envoy said in a letter to the UN Secretary General that the scientist had played an “outstanding role in the development of the first indigenous Covid-19 test kit” in Iran.

Amid widespread speculation of a possible Israeli involvement in the assasination plot, Israeli cabinet minister, Tzachi Hanegbi, said that Tel Aviv has nothing to do with the attack and has no information about who could be behind it.

“I have no clue who did it. It’s not that my lips are sealed because I’m being responsible, I really have no clue,” the minister, considered to be a confidant of the Israeli PM Benjamin Netanyahu, told N12’s Meet the Press show.

Earlier on Saturday, Iranian President Hassan Rouhani pointed finger at Israel, accusing “mercenaries of the usurping Zionist regime” of the assassination, but offered no evidence to support support the claim. Fakhrizadeh was ambushed by unidentified gunmen in his car outside of Tehran on Friday and died from his injuries in a hospital. No group or state has claimed responsibility for the attack so far, but previously Iran repeatedly accused Israel of assassinations and murder attempts of its nuclear scientists.

Back in 2018, Netanyahu claimed Fakhrizadeh was in charge of Iran’s supposed nuclear arms project dubbed the ‘Amad’ (‘Hope’). However, according to the International Atomic Energy Agency, which monitors Iran’s nuclear sites, a project by that name was long defunct by that time, while Tehran has repeatedly stated that its nuclear program is for peaceful energy purposes only.