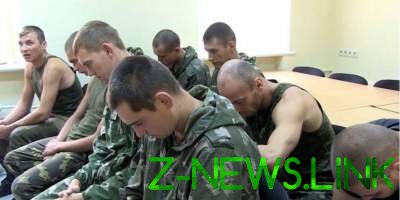 During the fighting with the Ukrainian military, many Russian paratroopers were captured.

A former soldier of the 76th division of airborne forces of Russia told in his interview to Novaya Gazeta about the invasion of Pskov paratroopers in Ukraine in 2014.

According to him, after the exercises in the Pskov region of Russia they were sent to Rostov, and from there to Lugansk region.

The Russian command said paratroopers that their task is to alleged “support of the convoy with humanitarian aid”, promising a prize of $50.

“We weren’t followed. I do no truck with humanitarian aid not seen… in a week we were told that we should storm the two villages. One village I will never forget it Novosvitlivka”, – told ex-military.

However, he noted that all the troopers understood that invaded the territory of another state, however, do not agree to comply with the order of destruction of the Ukrainian military was not there.

“Of course, I understand. But such an order. Well, I too watch TV. They were killing civilians every day, and raped, and children were shot,” said the man.

The battle for Novosvitlivka lasted about an hour. Although the invaders managed to capture, they suffered significant losses.

“Too many wounded were. Half of the group was wounded. From the bullets no one was hurt, but mostly all from shrapnel. From mortars. Generally we had the order to drive to the next village, but we have not reached it. Got this in Novosvitlivka. “Nonce” was, as they say, on the other side. We were only BMD,” – says the man.

He also added that, although his division captured no one came, however, in other departments, many during the battle was captured by Ukrainian military.

“After we after the battle, these two days in the village stood, we were collected to go to the airport in Lugansk. But we didn’t make it. We stopped not far from him, and the next day we were told to all go home. And more fighting was not. We returned first, in Rostov, there were another month. Then to himself,” said the former paratrooper.

The promised prize he and other soldiers who took part in the invasion, in the end never received, which again refused to go to Ukraine and left in reserve.

“We were told that we were not there. We got lost. We were on exercises and got lost. And paid nothing. I could have died. But I only then realized. Just had orders. As a result, no glory, no “for the Motherland” nor money,” said the man.