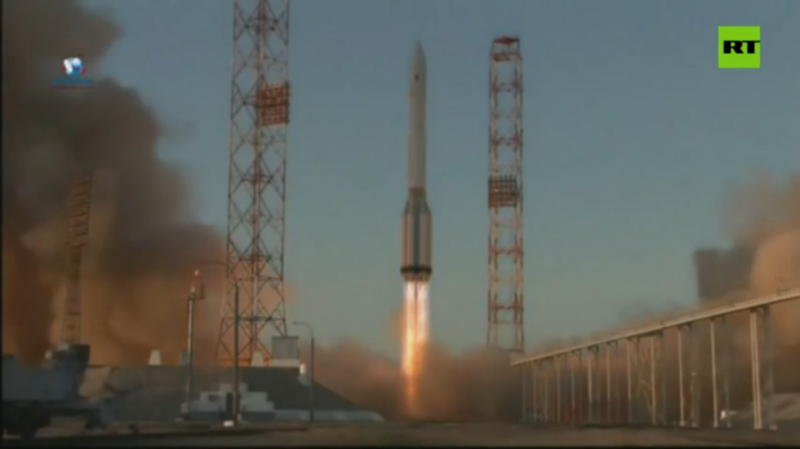 The launch, which took place at Baikonur Cosmodrome on Wednesday afternoon, fired a Proton-M rocket into the sky, carrying the laboratory. Less than ten minutes after takeoff, Proton-M detached from the module, putting it into orbit. It is due to be docked to the Russian section of the ISS on July 29.

Nauka, which will be used for experiments, can also generate oxygen for six people and regenerate water from urine. It will also have a second toilet for Russian cosmonauts and be able accommodate a third crew member.

Attached to the module is a European Robotic Arm (ERA) that can help with installing and replacing station components without the need to perform a spacewalk.

“The Nauka module will be located at the nadir port of the Zvezda Service Module and is intended for the implementation of the Russian program of scientific and applied research and experiments,” Roscosmos said in a statement.

Made out of stainless steel, aluminum alloy, and kevlar, Nauka will replace the Pirs module, which was initially launched in 2001. Pirs will detach on Friday and be taken by Progress spacecraft to sink in the Pacific Ocean.

The new module has famously suffered from delays, having initially been due to take off in 2007.

Earlier this year, the head of Roscosmos Dmitry Rogozin revealed that Moscow would withdraw from the ISS project in 2025 and create its own space station if the US continued to impose sanctions against the Russian space sector. President Vladimir Putin has already signed off on a project for a Russian-only orbital station, due to consist of three to seven modules.