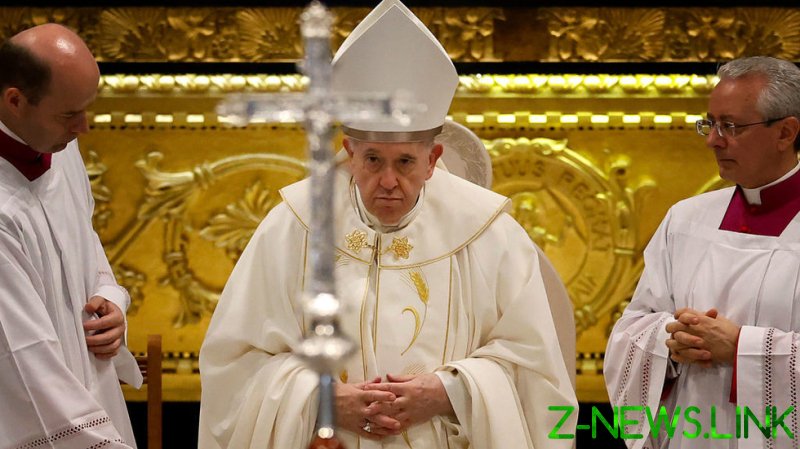 Chechens, Buryats and others who are “of Russia but are not of the Russian tradition” are acting with “cruelty” in Ukraine, the head of the Roman Catholic Church told the Jesuit magazine America in an interview published on Monday. Russian Foreign Ministry spokeswoman Maria Zakharova said such words go beyond mere Russophobia.

Ukraine’s people are being “martyred,” Pope Francis said in the interview, conducted last week at the Vatican. “Generally, the cruelest are perhaps those who are of Russia but are not of the Russian tradition, such as the Chechens, the Buryati [sic] and so on. Certainly, the one who invades is the Russian state. This is very clear.”

Speaking at a roundtable in the Russian Senate on Monday, Foreign Ministry spokeswoman Maria Zakharova called the comments made by Pope Francis beyond the pale.

“This is no longer Russophobia, it’s a perversion on a level I can’t even name,” she said.

Later, on Telegram, Zakharova pointed out that until recently the Western media claimed that Slavs were “tormenting the people of the Caucasus,” referring to the conflict between Russia and the Chechen separatists, and now they say it’s the other way around.

“We are one family with Buryats, Chechens and other representatives of our multinational and multi-faith country,” Zakharova added. “And together we will definitely pray for the Holy See, each in their own way – wishing them delivery from temptation.”

The Muslim Chechens live in the Caucasus Mountains, while the Buddhist Buryats are native to southeastern Siberia. Propaganda coming from the government in Kiev has painted the Ukrainians as “true Slavs” who are being menaced by the “Asiatic Russian horde.”

To hear the pontiff accuse of “cruelty” the Chechens and Buryats protecting the Donbass civilians is “strange, to say the least,” the head of Buryatia Alexey Tsidenov said about the interview on Monday.

“History knows many examples of those who considered themselves representatives of civilized nations destroying cities, countries and entire peoples,” added Tsidenov, pointing to the Crusades – declared by the popes of Rome – as one example.

“If such people have taken note of our fighters, that means they are doing their job well. We’re proud of you, boys. God is with those defending justice!” he said.