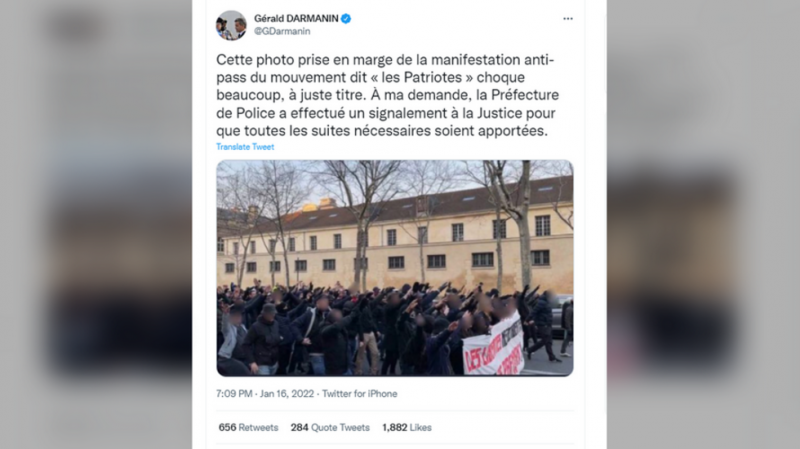 Darmanin tweeted a photo he said was taken “on the sidelines” of Saturday’s march, organized by the right-wing Les Patriotes (‘The Patriots’, LP) party in Paris. The image appears to show protesters extending their arms in a manner similar to a Nazi salute.

Darmanin said he asked police to report the “very shocking” incident to the judicial authorities so “all necessary steps are taken.”

LP founder and leader Florian Philippot denied that Nazi salutes were performed at the rally. He tweeted a video apparently filmed at the same event and at the same location, which shows protesters clapping and extending both their arms in unison while chanting ‘Freedom’.

A video from the same march, but filmed in a different spot, also shows protesters clapping and raising their arms in similar fashion.

“Mr. Darmanin has lied once again and seriously defamed [us]. We are considering legal action,” Philippot, who is running in the April 2022 presidential race, wrote.

The conservative politician elaborated on the alleged incident in an interview with BFM TV. “If there had been 200 Nazi salutes, I would have known about it. The journalists who were there would have seen it, as would have police officers, our volunteers and security detail,” Philippot said.

“So [the allegations] are completely grotesque and shameful, and will be obviously followed by a complaint against Mr. Darmanin.” 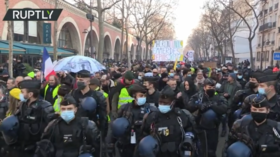 AFP said that two of its reporters covering the LP rally were attacked. The news agency said the protest was peaceful until the arrival of around “150 individuals identified by journalists as of the far-right.”

A hooded person with a loudspeaker shouted “It’s AFP, f**k those sons of bitches,” prompting a mob of at least 50 people to assault the news crew, AFP said. The journalists escaped unharmed while one of their security guards was injured in the head.

More than 50,000 people took to the streets across France on Saturday to denounce the tougher restrictions on the unvaccinated, which were passed by both houses of the French parliament over the weekend. Under the new rules, existing health passes required for entering establishments such as cafes, restaurants, gyms, and cinemas will be replaced by vaccine passes.

The government hopes the measure will bolster the immunization campaign and incentivize more people to receive booster shots.