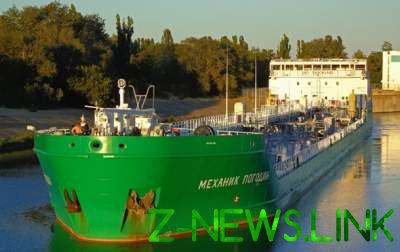 The tanker is not yet arrested, but a court decision is expected soon.

Russian ship Mekhanik Pogodin, which is under sanctions of the national security Council, went to the Kherson trade port. On Friday, August 10, said the representative of the President of Ukraine in the Autonomous Republic of Crimea Borys Babin on his page in Facebook.

“The ship now went to the Kherson sea trading port. I am sure that will come out of this port it soon. I am also sure that this time it to anyone to destroy will fail. Since sanctions issues and PDA different things – take the case to a steady control under authority,” – he wrote.

According to him, the issue of supply of petroleum products by vessels flying the flag of the Russian Federation inland waterways and associated risks the representation of the President in Crimea was raised at the highest level, as well as the intensification of the monitoring of sanctions regimes in the field of shipping.

We will remind, in March the Ukrainian Crimean border guards detained the ship Nord under the flag of Russia in the Azov sea with the ten crew members.

March 25, released from Kerch ship Nord was stopped by the ship of sea protection of state frontier service of Ukraine in 27 km from Obitochnaya spit (Zaporizhia region). After inspection of the Nord and documents, the border guards detained the ship, accusing the crew of “violating the procedure for exit from the temporarily occupied territory”.

On the night of April 8, the team arrested the Nord tried to leave the territory of Ukraine through the checkpoint goptovka on the cars with diplomatic plates of Russia, but was arrested. According to border guards, to take out the sailors from the Ukraine tried representatives of the Russian Consulate under the guise of its immunity.

On 19 June the court returned to the crew of the vessel Nord Russian passports. The lawyer of the sailors said that his clients are unable to leave Ukraine, because there is no final court decision in the case.