Home / Video news / In Kiev to block one of the channels. Video

In Kiev to block one of the channels. Video 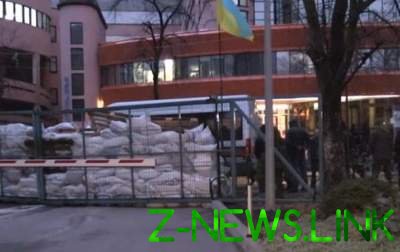 Protesters angered by the statement of the owner of the channel Murewa about Maidan and the war in the Donbass.

Activists in Balaklava on Sunday evening, 3 December, began a blockade of the office of the TV channel NewsOne for the street Field in Kiev. The protesters set in front of the entrance to the building is a fence with barbed wire and sandbags.

Protesters urge other activists to attend the protest. The protesters claim that they are veterans of the ATO and representatives of various radical organizations.

They called the owner of the channel, the extra fractional Deputy Evgeniy murayev a separatist. Protesters also urged to rename the channel NewsOne in “Glory to Ukraine”.

Earlier, on November 26 in the program “Ukrainian format” on the TV channel NewsOne Moore said he believes Euromaidan “is not a revolution but a coup d’etat”.

We will remind, in June, NewsOne TV channel said that the media and social networks began an information campaign, which aims to close it.