Home / auto / Hydrogen car: the Future is near

Hydrogen car: the Future is near 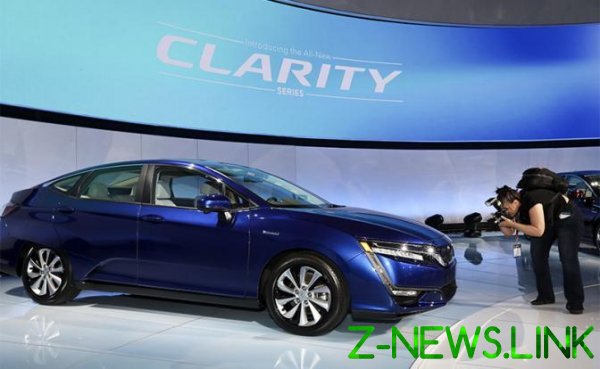 10 years ago in the seventh episode of the season 12 Top Gear (then he led the Clarkson, Hammond and may) James may tested the electric car — the Honda Clarity. Then came an article by Jeremy Clarkson in which he talked about the fact that this story has not caused the reaction they were hoping for. The audience waited enchanting the end of the season, and instead “captain slow” was telling some boring lecture about common Honda.

The plot of the main

Because it was not just electric in the batteries of Tesla, and not a hybrid type Toyota Prius. It was a car with a mini power station which converts the hydrogen into electricity.

Tank is located where conventional cars. Only instead of gasoline or diesel fill it with compressed hydrogen under a pressure of several hundred atmospheres. Then, in a special compartment, the hydrogen reacts with oxygen from the air and, thanks to a rather boring, but complex processes — call it magic — it turns out the electricity. Then this electricity goes to the electric motors and turns the wheels like in a conventional electric car.

Hybrids are the easy and immediate solution to the problems. But not really a solution, because they can not go without gasoline, and do not solve the problem, but only postpone it. Sooner or later the oil will still run. Moreover, when the batteries of hybrids finally die, their disposal brings huge harm to the environment. Even more than if you just went to the petrol car. I did not invent it — it was proved by scientists.

But if you think that hydrogen is the solution to all our problems. First, you can stop worrying about what oil will end. Second, there are no emissions. Thirdly, it is the decision of all problems related to energy. Can you tell me why mini power station inside this machine cannot be connected to your home and supply electricity to all electrical appliances in case of an Apocalypse or break the power lines?

The only problem is that hydrogen production is a rather complicated process. In addition, the necessary infrastructure for storage, transportation and sale of hydrogen.

Usually problems like these are solved with money. But the industry has no money because they spend it on payment of disilicate and penalties for violation of ehkonorm. The oil companies also have no money because a barrel today costs only $ 60. Besides, what good oil to make hydrogen, if the oil is easier to sell in its pure form? The government? The US has no money, they have around the world billions. Japan? Well, Toyota have created another voodoodoll Toyota Mirai, but nobody cared, as was the case with Honda.

However, there is still China. He has plenty of money. And I think he realized that for the hydrogen future. It is profitable hydrogen for three reasons. First — they come off the oil needle. Second — they have a big problem with the environment, and that hydrogen will solve them in one fell swoop. Third China could become a monopoly in this area and become the leading automobile nation in the world.

The Chinese government has started to invest in the car on hydrogen a few years ago and it gave its fruits. In March this year, the Chinese have rolled out their first vodorodnoi Wuhan Grove Hydrogen Automobile Co. And this is not just another vodorodnoi the type of Clarity or Mirai, this vodorodnoi, which can travel on one tank of 1000 km. In 2020, the plan to sell 5,000 vodorodnaya. By 2025 — 50 000, and by 2030 — a million.

Of course, in addition to the cars the Chinese will build infrastructure like petrol stations, factories for the production of hydrogen and everything else. Well, personally, I wish the Chinese luck. I hope that they will succeed and we will move into a new era of hydrogen as well as at the turn of XIX-XX centuries passed from horses to internal combustion engines running on oil in one form or another.