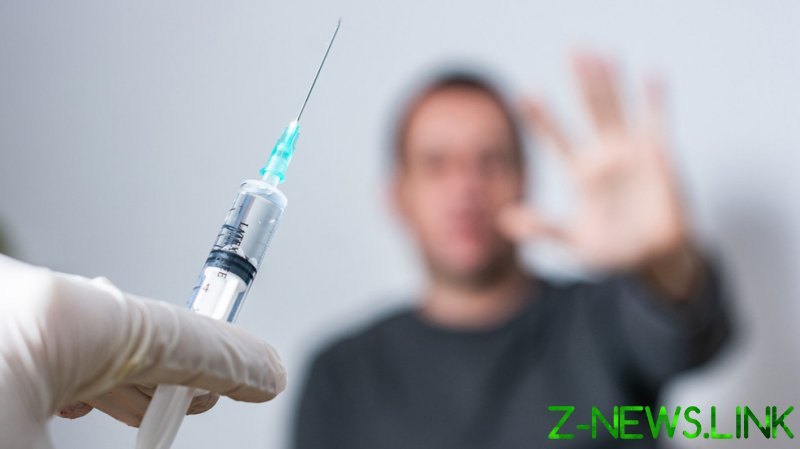 “The horrible thing about the Two Minutes Hate was not that one was obliged to act a part, but that it was impossible to avoid joining in. Within thirty seconds any pretence was always unnecessary. A hideous ecstasy of fear and vindictiveness, a desire to kill, to torture, to smash faces in with a sledge hammer, seemed to flow through the whole group of people like an electric current, turning one even against one’s will into a grimacing, screaming lunatic. And yet the rage that one felt was an abstract, undirected emotion which could be switched from one object to another like the flame of a blowlamp.” From George Orwell’s ‘1984.’

“Selfish idiots.” “Refuseniks.” “Anti-vaxxer loonies.” “Holding the country to ransom.” “A menace to their own health and ours.” “They’re like drink drivers.” Just a few of the insults that have been hurled at Brits who, despite the biggest drug promotion campaign in our history, have decided they don’t wish to take one of the new-on-the-market Covid vaccines.

Freedom of choice? Bodily autonomy? They seem to have gone out of the window, along with all the other basic rights we have lost in Britain these past 15 months. The date is 2021, but we’re actually living in Orwell’s ‘1984,’ with its daily ‘Two Minutes Hate.’

A whole succession of obnoxious newspaper columnists, radio ‘shock jocks’ and some ‘celebrities’ have gone out of their way to be as rude as possible to those who don’t want to have a jab – and call for extreme measures to be used against them that would be more associated with a totalitarian state in mid-1930s Europe than a country which still styles itself a ‘democracy’. Or, indeed, with Pretoria, circa 1965.

Apartheid – which we all denounced when in place in South Africa – has had a 2021 public health makeover and is back in vogue, with ‘Covid vaccine passports’ replacing ‘pass laws.’

Nick Cohen penned an article for the Observer entitled “It’s only a matter of time before we turn on the unvaccinated.” “Rational people will ask why they should continue to accept restrictions on their freedoms because of ignorant delusions,” he wrote.

Columnist Richard Littlejohn went even further  by calling for the unvaccinated to publicly declare themselves ‘Unclean.’ “If some people don’t like the idea of getting the jab, tough. I wouldn’t force them. But maybe refusniks should have to wear a bell round their necks and sport a sandwich board declaring themselves ‘Unclean’”, he wrote in the Daily Mail, in an article entitled “No jab, no job – it’s a no brainer.”

In similar vein there was Sean O’Grady, an associate editor of the supposedly ‘liberal’ Independent. His article, published earlier this week, was entitled “This is what we do about anti-vaxxers: No job. No entry. No NHS access.”

“The time has come when the hard choices are looming closer,” O’Grady opined. “If we don’t want this Covid crisis to last forever, we need some new simple, guidelines: No jab, no access to NHS healthcare; no jab, no state education for your kids. No jab, no access to pubs, restaurants, theatres, cinemas, stadiums. No jab; no entry to the UK, and much else.” I think we’ve got your point Sean. You wouldn’t make vaccination mandatory, but the unvaccinated wouldn’t be able to go anywhere, or do anything. And if they got ill? Well they’d just have to die because they shouldn’t have access to NHS healthcare. All in the name of ‘the common good’.

On the same day that O’Grady’s piece was published, we had one Sarah Vine weighing in with her penny’worth, too. “We can’t let idiots who don’t want Covid vaccines hold us hostage” was the title of her screed published in the Daily Mail. “You are stupid. Weapons grade stupid,” is how she addressed those who don’t want to take the Coronavirus vaccine. Who cares what this poisonous Vine thinks, I can hear you ask? But actually, it does matter, because her husband is none other than Michael Gove, the UK government minister currently heading a review into vaccine passports. If Gove’s wife thinks the unvaccinated are “weapons grade stupid” then it hardly gives us confidence that her husband won’t decide to discriminate against them.

It’s not just in print that the attacks on ‘refuseniks’ are coming. It’s on the airwaves, too. Iain Dale berated the unvaccinated on his LBC radio call-in show earlier this week. “The fact that people still refuse to get the vaccine for whatever reason, I don’t really care what the reason is, they are not only putting themselves at risk – they are putting other people at risk,” he said. “If you are 50, 60, 70, 80 years old and you still haven’t availed yourself of the opportunity of having the vaccine, I’m afraid you need your head read. You need your head examined. You are a selfish individual.”

At least Dale didn’t suggest putting poison into ‘refuseniks’ coffee as his LBC colleague Shelagh Fogarty did. “I’d literally be in fights with these people (vaccine decliners),” she told a caller. “How do you keep seeing them at work without wanting to poison their coffee.”

Let’s not mince words: We are dealing here with the very open, plain-view demonisation of a group of people, with no consequences for those who are doing the demonisation. And all this is happening, lest we forget, in ‘woke’ times when anything you say might be seen as ‘offence’, ‘racism’, ‘sexism’, ‘genderism’ or a form of ‘ism’ or ‘phobia.’

To see the egregious double standards, just replace the ‘unvaccinated’ with a minority racial or religious group. But the unvaccinated are fair game. Hate crime, according to the Crown Prosecution Service website, “can be used to describe a range of criminal behaviour where the perpetrator is motivated by hostility or demonstrates hostility towards the victim’s disability, race, religion, sexual orientation or transgender identity.” Vaccine status is not a “protected characteristic” so it seems people can be as hateful to the unvaccinated as they like.

But that doesn’t make what’s going on right. Far from it.

If someone is vaccinated, why should they care if someone else isn’t? We never had these arguments before about the flu jab. Either the vaccine works to protect the vaccinated, or it doesn’t. Nor were those who decided not to have a flu vaccine labelled ‘anti-vaxxers.’ You can be generally pro-vaccination, but have rational ‘wait and see’ reservations about the new-on-the-market Coronavirus ones, especially if your chances of becoming ill or indeed dying from Covid are extremely low. But that nuanced position is simply not recognised in the current, coercive ‘Just take the bloody jab’ hysteria.

As for the line that it is the unvaccinated who are holding the country hostage by putting in jeopardy an end to Covid restrictions? Sarah Vine really needs to look closer to home. Literally. It was the government of which her husband is a prominent member which assured us that life would be back to normal as soon as the most vulnerable were vaccinated. In an interview with The Spectator in January, Health Secretary Matt Hancock said he would “Cry freedom” as soon as the most vulnerable were vaccinated.

But we still don’t have freedom. The goalposts have moved from vaccinating the ‘most vulnerable’ to now vaccinating everyone. Is it any surprise there are those who wonder if this is motivated by the introduction of vaccine passports, which in turn could lead to other digitised social credit systems?

But, conveniently, it’s the vaccine ‘refuseniks’, the current subject of the daily Orwellian Two Minutes Hate, who are being blamed for continued restrictions and not the authorities. In these toxic times, ‘divide and rule’ has never been more blatant.