Home / WORLD / Going in for the Kirill: Fans row as Russian hockey star suffers gruesome nose blow after being smacked in face with stick (VIDEO)

Going in for the Kirill: Fans row as Russian hockey star suffers gruesome nose blow after being smacked in face with stick (VIDEO) 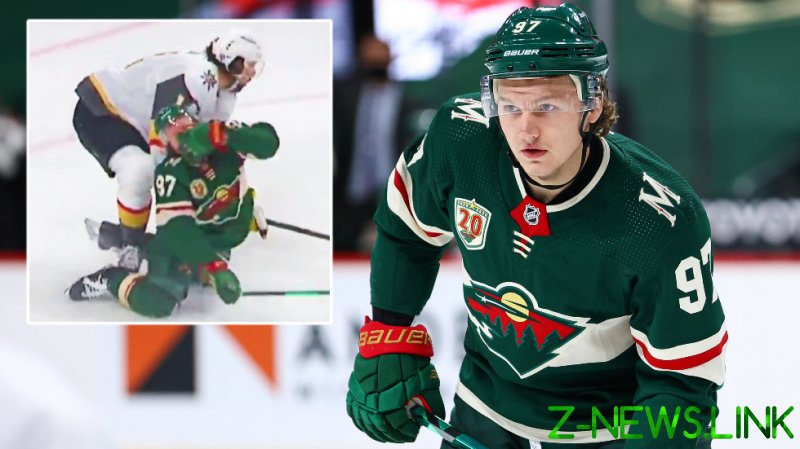 Shocked viewers watched as Minnesota Wild winger Kaprizov copped a whack straight in the nose as he tumbled forward, immediately clutching his injury in pain before receiving urgent treatment to stem the bleeding.

There was bafflement as Nicolas Hague, of the Vegas Golden Knights, received no penalty, as well as fury towards the match officials and counter arguments that the 24-year-old had put his face in a position where it could be hit.

“Did he lose a tooth here?” asked one over the footage that led to reports suggesting Kaprizov had broken his nose, while another enquired of Hague: “So you help a guy down and then pointlessly whip your stick around to whack him in the face and you’re saying it’s clean?”

‘High-sticking’ is a contentious issue in the sport, with rising star Kaprizov appearing to receive his fair share of rough play in his notoriously punishing profession.

“I don’t understand it but the guys on [broadcaster] NBC said when you’re down like that, I guess high-sticking is taken off the menu,” admitted one dubious response.

“Would have had to have been called against Vegas as well – and, from what I’ve seen, these refs aren’t too keen on Vegas penalties.”

Another argued: “Kaprizov has been cross-checked so often, he has the name of the stick on his back.”

The ugly incident compounded a poor run of form for Kaprizov and the Wild in their series with the Golden Knights.

Since winning the first of the seven games the teams will play against each other 1-0, Kaprizov’s side have lost 3-1, 5-2 and 4-0 to slump 3-1 behind overall.

In a more succinct summary of their feelings on the fracas, a Wild supporter wrote: “Unbelievable. These f*cking refs.”