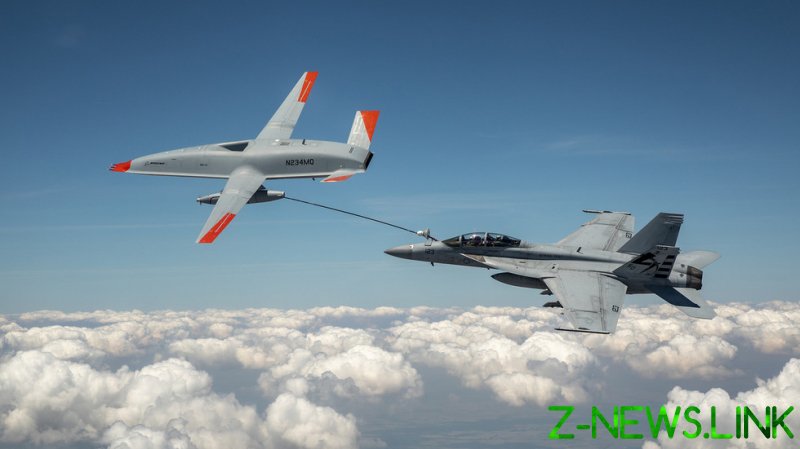 “This history-making event is a credit to our joint Boeing and Navy team that is all-in on delivering MQ-25’s critical aerial refueling capability to the fleet as soon as possible,” said Leanne Caret, president and CEO of Boeing Defense, Space & Security.

The US Navy has been pushing hard for integrating more drones into logistics roles, in order to save money and manpower for other priorities, though the reform has been met with institutional resistance.

“This is our mission, an unmanned aircraft that frees our strike fighters from the tanker role, and provides the Carrier Air Wing with greater range, flexibility and capability,” Reed said in a statement.

The drone used the same Cobham Aerial Refueling Store (ARS) system that the Navy has installed on a small number of its carrier-based Super Hornets, in order to provide in-flight refueling to the rest of the air wings. The Navy plans to buy more than 70 of the drones, freeing up the piloted aircraft for their primary fighter and attack missions.

The June 4 test flight was launched from the MidAmerica Airport in Mascoutah, Illinois – near the Boeing facility in St. Louis, Missouri. For carrier trials later this summer, the MQ-25 will be moved to Norfolk, Virginia. The drone still has to undergo flight envelope expansion and engine testing trials as well.

In-flight refueling goes back to the early days of aviation, with the first instance recorded in June 1923 between two US Army Air Service biplanes. The first combat refueling took place during the Korean War in the early 1950s.

Boeing’s releases and the Navy statements did not make any mention of the F-35C Lightning II Joint Strike Fighter, Lockheed Martin’s intended replacement for the F/A-18s. The beleaguered fifth-generation fighter officially entered US Navy service in 2019, and only one fleet squadron is currently operational.