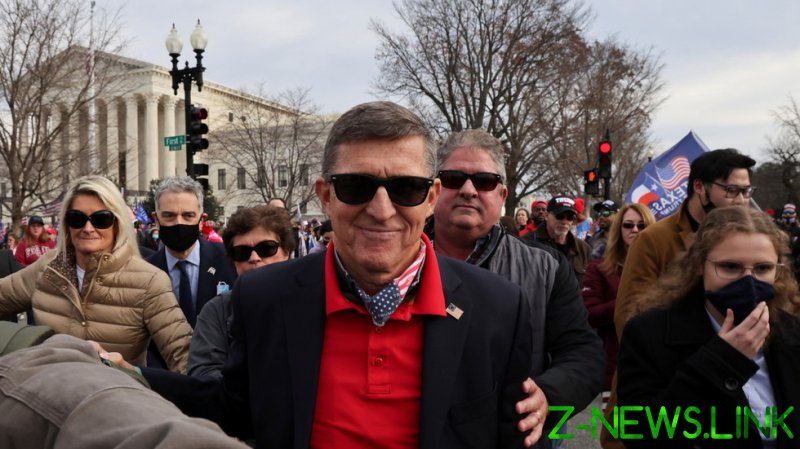 “Let me be VERY CLEAR – There is NO reason whatsoever for any coup in America, and I do not and have not at any time called for any action of that sort,” Flynn posted on what is purportedly his Telegram channel on Monday.

The retired US Army Lieutenant, known for his unwavering support of former President Donald Trump, appeared to suggest that the remark he made at a recent conference in Dallas, Texas, was intentionally misconstrued by the media, as it rushed to seize on the clip.

In the short video, filmed over the weekend and which began making rounds on Monday, Flynn was asked by a supporter “why what happened in Myanmar can’t happen here.”

“No reason, I mean,” Flynn responded, before adding: “It should happen here.”

“No reason, that’s right,” he said further. As Flynn was responding to the question, he was constantly interrupted by loud cheers from the crowd.

While the footage provoked angry backlash from the general’s liberal critics, accusing him of seemingly endorsing a military coup, Flynn argued on Telegram that he, on the contrary, outright rejected such a scenario.

The former national security advisor claimed that he in fact said: “There is no reason it (a coup) should happen here (in America),” when responding to the question.

Flynn fired back at the media for what he called “a boldface fabrication” of his words “based on twisting reporting at a lively panel at a conference of Patriotic Americans who love this country.”

Flynn’s critics, however, were not convinced by the general’s attempt to set the record straight, suggesting he was “attempting to gaslight his way out of this” and that he was “backtracking” from his endorsement of a military operation.

Flynn has taken to Parler to share a similar message in his defence, while his former attorney Sidney Powell blasted the reports as “fake news taken out of context and grossly magnified to the point of distortion.”

Both Flynn and Powell have been banned from Twitter as part of a post-January 6 riot crackdown, targeting proponents of the QAnon conspiracy theory.

A coup in Myanmar in February led to the ouster of the country’s de-facto civil leader Aung San Suu Kyi. The military rule sparked mass protests that have triggered heavy-handed police response. More than 800 people were killed during the crackdown, according to the Assistance Association for Political Prisoners, while the official death toll stands at some 300 slain protesters and 50 police.

Flynn served as national security advisor to Trump before he was accused and later charged of lying to the FBI over his contacts with Russian officials. While initially Flynn struck a guilty plea with the prosecution, he later recanted the deal, claiming he had been entrapped by the FBI. Flynn was eventually pardoned by Trump in November last year.