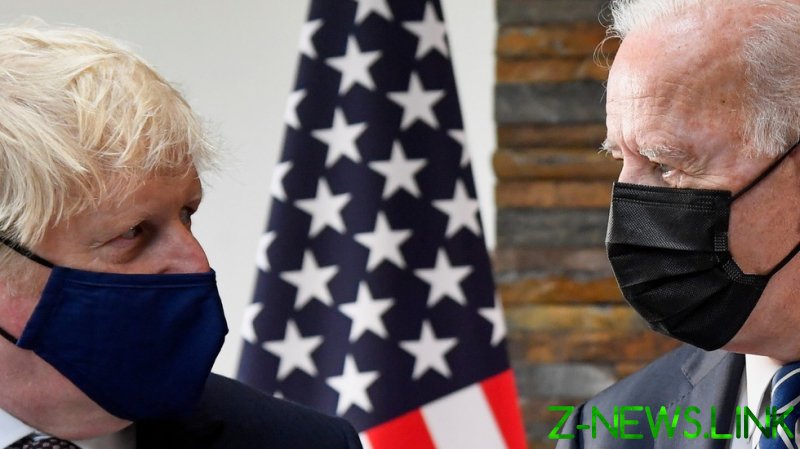 Attempts to flag the newly-signed trade, defence and tech deal between the US and UK as a Atlantic Charter 2.0 are nothing more than shameful, tin-eared grandstanding aimed at infusing the G7 gabfest with some sort of historical significance.

Wartime leaders Franklin D. Roosevelt and Winston Churchill signed the original 1941 charter under a veil of secrecy at a meeting aboard the USS Augusta moored in the cold waters of Placentia Bay, Newfoundland in the middle of a terrifying war. The latest agreement was signed at a luxury five star seaside hotel with a golf course soaked in the Cornish sunshine.

The original Atlantic Charter was an attempt by the allies to enshrine “certain common principles in the national policies of their respective countries on which they base their hopes for a better future for the world.”

The new agreement was looking to open a travel corridor so lockdown-weary Brits and their kids can make it to Disneyworld this summer but after a look at Delta coronavirus variant infection rates in the UK, Biden nixed that. What’s the point of a  ‘special relationship’ if you can’t bend a few rules?

Sure there’s some waffle about defending democracy, boosting trade, a ‘landmark’ technology pact, action on climate change, protection of biodiversity and the usual guff that earnest young wonks love to cram into agreements like this. Something for everyone.

The agreement is one big PR stunt. A not-too-subtle effort to reset the UK-US relationship after the tumultuous Trump years with two less-than-leaderly figures in PM Boris Johnson and President Joe Biden now in charge, hoping the blatant attempt to appear statesmanlike will make them appear, well, statesmanlike.

Let’s face it. Churchill and FDR they aint. Boris has written a Churchill biography, but that’s as close as they get. Lord help us, if these two clowns were leading us into a world war we’d all be speaking Mandarin by the end of next week.

The original Atlantic Charter, admittedly, was also something of a public relations exercise. It signalled intent and agreement between two nations that both wanted a massive say in shaping the world if and when the Nazis and the Japanese were defeated.

Churchill’s underlying motive in signing the charter was to get the Americans into the war while FDR was hoping his involvement would encourage the American public to approve US intervention on behalf of the Allies. Neither man got what he wanted at the time. That only happened after Pearl Harbour.

What they did manage to achieve, however, was to lay down markers for the future using eight common principles that, as time passed, even they had trouble abiding by.

For instance, principle two expressed a “desire to see no territorial changes that do not accord with the freely expressed wishes of the peoples concerned.” Maybe the CIA lost its copy of the charter before ousting Iranian Prime Minister Mohammad Mossadegh in a military coup in Iran in 1953, and organising a similar plot in Guatemala in 1954. Then there was the CIA coordination of attempts to successfully assassinate the first prime minister of the Congo, Patrice Lumumba, in 1960; the tactical support given to the killer of the Dominican Republic’s brutal dictator Rafael Trujillo in 1961; plus further coups in South Vietnam (1963), Brazil (1964) and Chile (1973). That’s quite a run.

Then there was principle eight that “for realistic as well as spiritual reasons” urged the abandonment of the use of force, “Since no future peace can be maintained if land, sea or air armaments continue to be employed by nations which threaten, or may threaten, aggression outside of their frontiers.”

Again, maybe the copy of the Atlantic Charter, which easily fits on a single sheet is the sort of thing that is pushed so far to the back of the drawer in the desks of the Oval Office and Downing Street that it becomes wedged down the back, inaccessible and long-forgotten was never passed on from leader to leader.

Because I’m sure principle eight has never been brought up in any conversation about the US bombing campaigns in, say, Afghanistan. In 2006, 310  bombs were released by the US coalition but by 2019 that figure had grown to 7,423. Clearly a spiritual deficit there.

Going back to the ten years from 1965 spent in south east Asia, the US and its allies dropped more than 7.5 million tons of bombs on Vietnam, Laos and Cambodia, double the amount dropped on Europe and Asia during the Second World War.

Then there were battles in Malaya, Suez, Korea, the Balkans, Iraq, Northern Ireland, Palestine and, of course, the Falklands. All fought in the years after the guiding principles of the Atlantic Charter had been solemnly declared.

So it seems inappropriate to flag up this piecemeal bit of puffery signed in Cornwall as some pivotal moment for a relationship between two countries whose behaviour veered so badly off course from the intention of those principles set out in the original charter.

While Churchill died in 1965, before most of the egregious bombing in Vietnam and Afghanistan, FDR didn’t even survive until the end of World War II, having died from a brain haemorrhage in April ‘45.

What either of these once great wartime leaders would have made of the charter they signed hopeful of peace in the future and their names being invoked in the execution of this latest stunt doesn’t bear thinking. Shame.