Home / economy / Anatomy of a rumor: PE as an alternative to quarantine

Anatomy of a rumor: PE as an alternative to quarantine 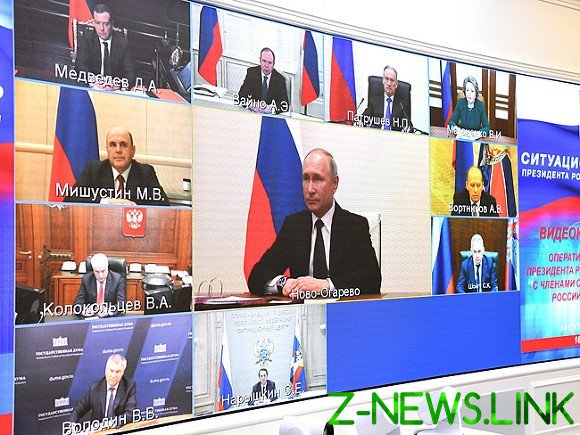 Russia became the birthplace of digital protest, the Kremlin tells off governors and bankers, and Igor Sechin, seems to have missed out of the hands of big business newspaper.

Vladimir Putin continues to distance themselves from taking unpopular decisions in the fight against the epidemic COVID-19, the responsibility for the performance of their own good, but not always detail thoughtful suggestions, carefully shifts to governors, and now bankers. Thus, according to the Kremlin press Secretary, Dmitry Peskov, the President is not worried about his ranking, what would any written media and not repeated by different analysts.

Until we dispense with the army on the streets

The government does not exclude any variants of development of the epidemic, including those which may entail the need for stricter quarantine measures. As you know, after the high alert is, the next step is declaring a state of emergency (state of emergency). This topic is being actively discussed in the society and not out of my head at the officials — it is felt their mood. For example, Moscow police denied the rumors about gangs of unemployed people who Rob old people at the exit of stores, said that no extra security measures do not need to take. In turn, the Moscow mayor said that he sees no need for the deployment of troops to the Russian capital, as happened in some other cities of the world.

Thus, the decision on introduction of state of emergency is as yet not accepted. There are alternative distribution systems of digital badges, introduced in the capital, to other regions. Such plans have caused outrage in social networks in the first place because even the authorities of other regions, as rumor has it, immediately began to explain to the Federal centre that they have no technical possibilities for the implementation of the Moscow model of the quarantine.

However, the digital pass will eventually be introduced in about a quarter of the Russian regions. The rest, apparently, at risk of harsh criticism from the President, which have already spread, for example, the Governor of the Voronezh region Alexander Gusev for being too slow the building of new infectious hospital, and then went to talk about the impending resignation of this official.

In turn, the head of the Moscow region Andrei Vorobyov scolding under the video mayors of the region. And he either accidentally, or deliberately, during one of these conversations, confirmed rumors that the Federal center has set targets for regional authorities. One of them is the so-called “isolation index”, which should not exceed three points. Under this, apparently, now everything and try to fit the situation in large cities.

While there are persistent rumors that the quarantine will have to extend further. Time, which is now called, is even alleged is not the limit. The Russians, who previously didn’t pay much attention to the experience of other countries, now focusing on the same Germany, begin to figure out that sooner Jun free to leave the house, might not Shine.

As they say in the Kremlin with noticeable irritation took the initiative of opposition leader Alexei Navalny to distribute more than 10 trillion rubles as direct grant aid to the population. Follow Dmitry Peskov, the idea state-controlled media began to call populist. But in reality, says a source close to the presidential administration, the “top” understand that the additional compensation is still to somehow pay. The problem is that it was supposed to sound positive solution gradually. Now any statement of the President will be evaluated through the prism of offers Bulk. The generosity of the government will surely be more modest than the opposition.

The paradox in the fact that the major Russian bankers (and former members of government) the head of Sberbank German Gref and Bank “Opening” Mikhail Zadornov in one voice say that just to give people money, as in most EU countries, USA, Japan and many other countries, the authorities should not. And it seems to be placed on the trajectory of the “government rate”. But at the same time Vladimir Putin has chosen the “whipping boys” of bankers who, in his opinion, too slow to implement government requirements for the issuance secretitos business.

On this subject the government has already had a loud quarrel. First, the Minister of economic development Maxim Reshetnikov personally called “major banks” and found that there is a loan to almost impossible. Then, as they say, on the complaint of the same bankers, at a meeting of the government punished Prime Minister Mikhail Mishustin. And now all at once have got more from the President.

The order of the government as rumors, and the truth is not executed, and the banks believe it is the problem of the state which it tries to pass on to their shoulders. In the same way as previously, the problem shifted the actual payment of unemployment benefits on the shoulders of employers, when Vladimir Putin announced a “weekend with the continued payment of wages.”

By the way, a separate, though associated with the Finance and banking hearing for the Minister of the Eurasian economic Commission Sergei Glazyev, former adviser to the President, which recently broke its own anti-crisis proposals. The Central Bank of his ideas were considered so harmful that asked the Kremlin “to reduce communication activity” of this famous figure, which, by the way, in 2004, was a rival of Vladimir Putin in the presidential election.

How it will end for Glazyev is still unknown. But, says a source close to the presidential administration, rather, he that is called, “put on view” and will be asked to temporarily hold my tongue. No formal sanctions to the Minister of the Russian government can not, and will not apply.

Rallies in the North Caucasus and on the Internet

Another surge of irritation in the Kremlin, caused manifestations of protest activity of the new type. In Vladikavkaz passed the rapid rally against the isolation — people demanded the lifting of all restrictions, arguing that the coronavirus is not dangerous. “This is an illegal action which may have a negative impact on the epidemiological situation”, — said Peskov. According to media reports, the rally was delayed a few dozen people.

One of them was the initiator of this campaign Opera singer Vadim Cheldiev. He was arrested for two months, and he already went on hunger strike. Earlier against Cheldiev, who lives in St. Petersburg, a criminal case was initiated on the distribution of fakes because of the rollers, in which he expressed doubts about the dangers of coronavirus. In this regard, Cheldiev detained and escorted to North Ossetia.

The Academy of young singers of the Mariinsky theatre, where he studied Cheldiev, a special letter (which appeared in social networks) has notified the Minister of culture of North Ossetia, that this man never was their soloist and never acted on stage of the Mariinsky theatre, and a few months after admission was expelled for academic failure and “aggressive attitude towards colleagues.”

A possible rationale for all of these events Schuhmacher called the struggle for a post of the head of North Ossetia, which allegedly involved the Prime Minister of the Republic Mr Tokaev who seeks the protection of the well-known Russian Ossetian head of the Mariinsky theatre Valery Gergiev, is close to Vladimir Putin.

Almost simultaneously in Russia there is a new form of expression of protest — online-rallies. It all started in Rostov-on-don, where the people, using the “Conversations” application “Yandex.Navigator”, has begun to put a label near the building of the regional administration and leave comments with criticism of how officials are struggling with the epidemic. Then such actions continued in Yekaterinburg, Krasnoyarsk, Nizhniy Novgorod, Voronezh, Saint-Petersburg, Ufa, Moscow.

Authorities are already thinking about how to prevent such activity. In the state Duma say that it is quite possible this will need to enact new legal prohibitions.

Who owns the “news”?

Another tangle of rumors formed around the leading business magazine in the country — the newspaper “Vedomosti”. After the Russian authorities banned foreign owners to own media in Russia, the newspaper came under the control of the family media Manager Demyan Kudryavtsev, (which at the time in a similar manner participated in the change of the ultimate owner of the publishing house “Kommersant”), and then family his partner Vladimir Voronov.

In the course of the transaction to the acting chief editor of “Vedomosti” appointed Andrey Shmarov, who immediately began to MOP up the newspaper in the first place, from the publications about Rosneft, headed by Igor Sechin. Accordingly, there may be rumors that he is the real new owner of “sheets” and stands for a nominal customers — the main editor of the newspaper “Our Version” Konstantin saticoy and managing Director of Arbat Capital Alexey Golubovich.

And suddenly Golubovich gave to understand that the struggle edition with a new boss for the freedom of speech may win the deal to sell the newspaper like as not be completed.

As an explanation for this turn of events, a version that the Kremlin curators of media and domestic policy Alexei Gromov and Sergey Kiriyenko somehow cleverly agreed, and frontal approach to taking control of the editorial Board of the shrew is considered ineffective. In the end, the newspaper will now become other people, though, probably too close to the Kremlin. However, while this is only a rumor and lose on the newspaper front, the head of “Rosneft” slagmaker not yet counted.