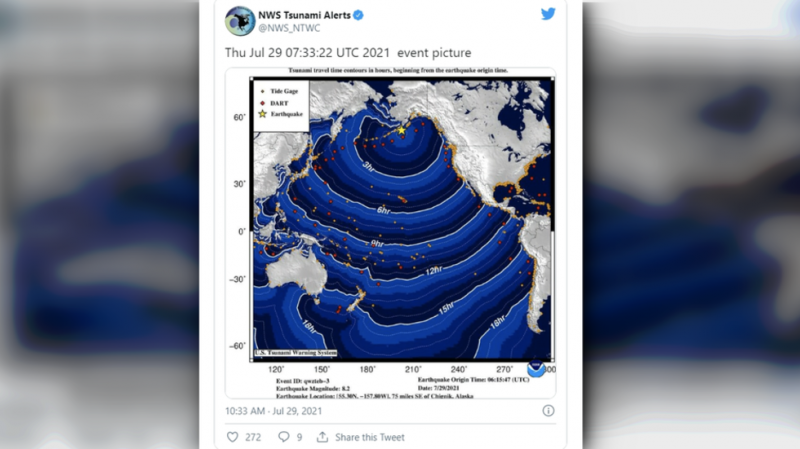 At 10:15pm local time on Wednesday evening (06:15 GMT Thursday), an earthquake rocked the Alaskan Peninsula. The US Geological Survey said the quake, measuring 8.2 in magnitude, had occurred at a depth of 29 miles (46.7km), and that the epicenter was 56 miles (91km) southeast of Perryville, a small settlement on the peninsula.

The US National Tsunami Warning Center issued the most severe warning on its scale for part of the peninsula. The warning was later removed but an advisory noticed remained. A “watch” level status was also removed for Hawaii.

In unverified footage posted on social media, the tsunami sirens can be heard across the bay. The roads appear full as people flee low ground to areas of safety.

The Pacific Tsunami Warning Center also warned of a possible tsunami threat to the US territory of Guam and the Northern Mariana Islands.

The organization shared an image on Twitter showing the tsunami travel time indicated by contours on a map.

The US National Weather Service Guam has downgraded the possible threat, noting, “At this time, there is no tsunami threat out for Guam & the CNMI (Northern Mariana Islands).”

The quake is the largest to hit the US since 1965, and the sixth-largest in the continent’s history. All the US’s most severe earthquakes have occurred in the state of Alaska.