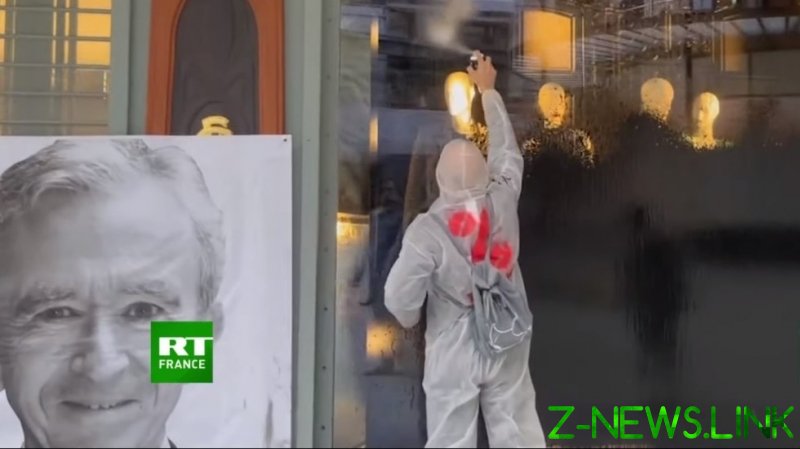 The shopping windows of the historic La Samaritaine store, which only reopened following a renovation on June 23, were colored with black paint and had the slogan “Dirty Money” painted over them.

The activists also attached a banner to the storefront, on which they attacked France’s richest man, LVMH boss Bernard Arnault, for becoming 62 billion euros wealthier during a pandemic that has infected more than 5.7 million people in the country and killed over 111,000.

Another – much larger – banner was unfurled over the LVMH’s headquarters in the French capital. It featured portraits of Arnault, telecoms investor Patrick Drahi, Kering luxury group founder Francois Pinault, and the daughter of the late L’Oreal heiress Liliane Bettencourt, with the label: “A gang of profiteers.”

The local social justice group Attac, which is pushing for additional taxes on the country’s richest people, said in a statement that Saturday’s action was aimed at decrying “the shameless enrichment of billionaires during the health crisis.”

The fortune of the French rich “explodes” through tax evasion and unconditional aid from the government, while the most vulnerable people are being left to pay for the damage done by the pandemic, Aurelie Trouve, the group’s spokesperson, wrote on Twitter.

Valerie Pecresse, head of the Ile-de-France region, which includes Paris, condemned the protest, insisting that “attacking the country’s top companies, which create jobs and make the territories more attractive” was no way to achieve social justice.

LVMH has not yet issued an official response to the stunt.