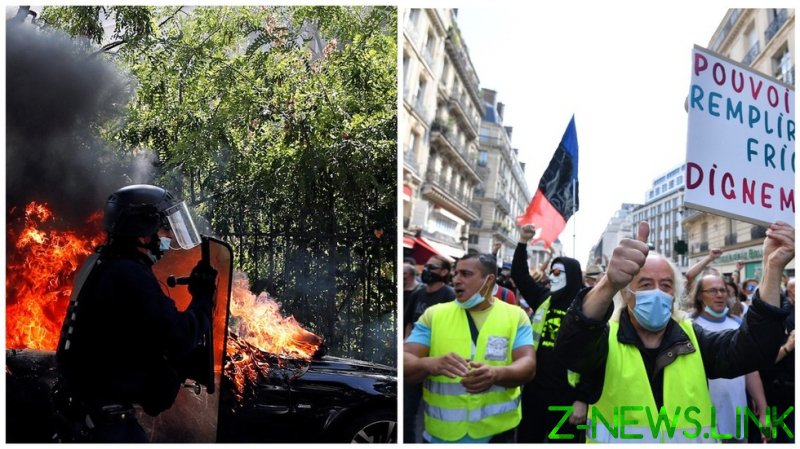 In Paris, throngs of Yellow Vests began amassing in the capital’s center, with police expecting thousands of protesters to take part. Two demonstrations have been authorized by local prefectures, one near the Champs-Elysees and Place de la Bourse, and another near Place Wagram.

The procession that set off from the Place Wagram saw people chanting slogans and handing out leaflets listing the movement’s grievances, including demands for increases in the minimum wage, retirement pay, and other social benefits.

The situation became tenser when scuffles broke out, prompting law enforcers to use tear gas and to make arrests en masse. By Saturday afternoon, at least 200 people had been detained, with this number likely to rise as the day progresses.

Paris police were prepared ahead of the renewed Yellow Vests demonstrations. A number of heavily armed riot squads were strategically placed all over the protest venues, most notably at the iconic Champs Elysees avenue – previously a site of many violent scenes. This area was declared off-limits.

Previous Yellow Vest marches in the area were overshadowed by violence, destruction of property and injuries to both police and protesters. “There can be no destruction and chaos on the Champs Elysees,” police prefect Didier Lallemant told news outlet BFMTV, urging protesters to remain “calm.”

Warnings aside, police forces have geared up for the upcoming season of protests, rolling out new crowd-control weapons. A new non-lethal grenade – said to be less dangerous than earlier versions – was rolled out this week, despite concerns that such a powerful weapon could cause grave injuries.

For their part, some protesters had also prepared for street scuffles. Officers have seized an array of prohibited items, among them knives, hammers and bolt cutters.

The Yellow Vests last major demonstration took place back in March 14, just three days before France imposed a strict lockdown due to the blighting Covid-19 epidemic.

The months-long breaks led to speculation in media that the movement has been losing steam. Named after the bright, high-visibility work apparel they wear, the Yellow Vests had protested every Saturday since November 2018 until the lockdown. The movement emerged on the back of public outcry over fuel tax rises, and has since snowballed into a wider revolt against President Emmanuel Macron’s government.