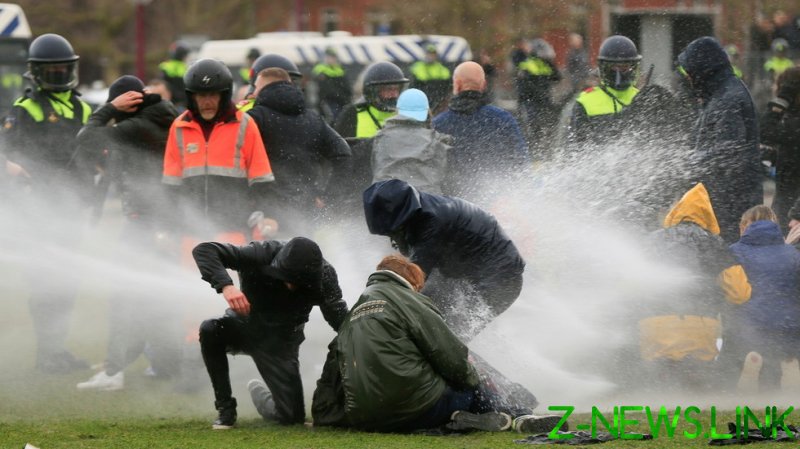 Police were deployed on Sunday to disperse curfew-defying protesters in The Hague, Amsterdam, Eindhoven, Enschede, Venlo, Stein, Roermond, Oosterhout, Breda and elsewhere across the country, marking the second day of civil disobedience stemming from the Dutch government’s new Covid-19 restrictions.

Although most of the demonstrations were peaceful, the situation in Eindhoven quickly descended into violence. Police used tear gas and water cannons to break up the protest after the crowd began throwing rocks and other projectiles at officers.

In one video purportedly filmed during the skirmish, a woman and a man can be seen walking past a police vehicle armed with a water cannon. The man turns toward the vehicle and raises his arm, possibly pointing a phone or camera at the police. The water cannon then immediately aims at the pair and fires, hitting the woman. The impact knocks her hat off as she’s pushed into the side of a building and then falls to the ground.

Footage taken moments later shows the man leading the injured woman away from the area, one side of her face covered in blood. The man is seen briefly turning towards the water cannon and cursing the police as he escorts the woman to safety.

The clip is one of many startling scenes caught on camera during Sunday’s nationwide unrest. In The Hague, rioters reportedly set a police motorcycle ablaze after forcing an officer to flee.