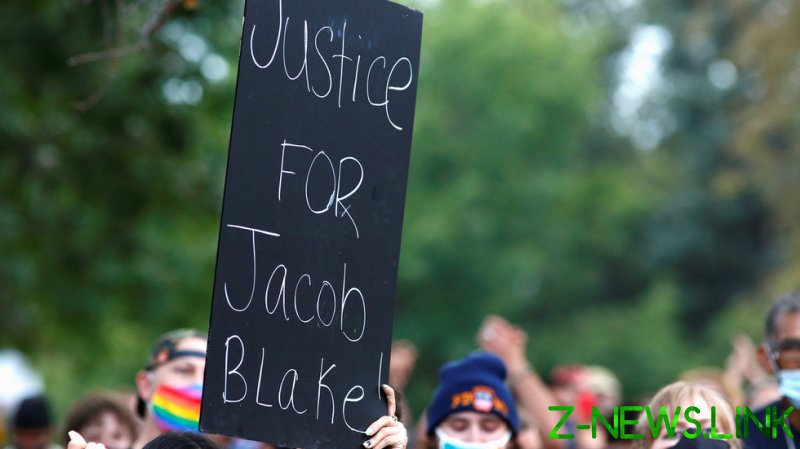 The DOJ announced the decision in a Friday press release, saying that a review of the case did not turn up sufficient evidence that Kenosha Police Department (KPD) officer Rusten Sheskey “willfully” used “excessive force” during the August 2020 shooting, in which Blake was struck some seven times, but survived.

“After a careful and thorough review, a team of experienced federal prosecutors determined that insufficient evidence exists to prove beyond a reasonable doubt that the KPD officer willfully violated the federal criminal civil rights statutes. Accordingly, the review of this incident has been closed without a federal prosecution,” the department said.

The DOJ explained that in order for a federal civil rights case to proceed against an officer, prosecutors must establish beyond a reasonable doubt “that an officer ‘willfully’ deprived an individual of a constitutional right” and “acted with the deliberate and specific intent to do something the law forbids.” Considerations such as “negligence,” mistakes or accidents, as well as decisions made based on fear or simply “bad judgement,” do not factor into such cases, setting an exceptionally high standard of “intent” for officers accused of wrongdoing.

Known as ‘qualified immunity,’ the legal standard effectively insulates officers and other government officials from charges resulting from “reasonable but mistaken judgements about open legal questions,” and has been established through a series of cases, beginning in earnest with 1967’s Pierson v. Ray. While ordinary citizens may be prosecuted regardless of their “willful” intent to violate a law, qualified immunity sets a different standard for state agents, complicating prosecutions.

The incident with Blake unfolded on August 23, 2020. Responding to a domestic disturbance call in a residential area in Kenosha, KPD officers arrived amid an altercation between Blake and his significant other, ultimately seeing police unleash tasers on an uncooperative and belligerent Blake. With officers failing to detain him after the scuffle, Blake then attempted to enter his SUV – in which his child was seated in the back, apparently over the objections of his mother. As Blake leaned into the vehicle, Shesky fired seven rounds from his service pistol, several hitting Blake, gravely injuring him.

Blake was airlifted to a nearby hospital for treatment and ultimately survived his injuries, though suffered some permanent damage, including some degree of paralysis below the waist.

Shesky was cleared of wrongdoing by his own department and returned to duty earlier this year, though the DOJ at the time was still reviewing the case for potential federal civil rights violations. Kenosha County District Attorney Michael Graveley also declined to prosecute Shesky, saying that viral footage of the incident did not reflect all of what happened, also claiming Blake had been armed with a knife during the altercation. (Blake later admitted that he had a pocket knife in his possession at the time, and that he had dropped it and was merely trying to retrieve it, maintaining “At that time, I wasn’t thinking clearly”).

Blake also attempted to launch a civil suit against Shesky, seeking more than $776,000 in damages, but the case was tossed earlier this year, with the Kenosha City Council voting unanimously to reject the claim.

The officer-involved shooting came amid a wave of demonstrations over police brutality, ignited in May 2020 by the death of George Floyd at the hands of officers in Minneapolis. While Blake’s family urged the public to refrain from violence, the incident nonetheless set off days of rioting and looting in Kenosha, mirroring protest-related unrest that broke out in dozens of American cities last year.