Home / WORLD / Why you should care about Kazakhstan: The drought nobody is talking about could be a harbinger of doom for the region & the West 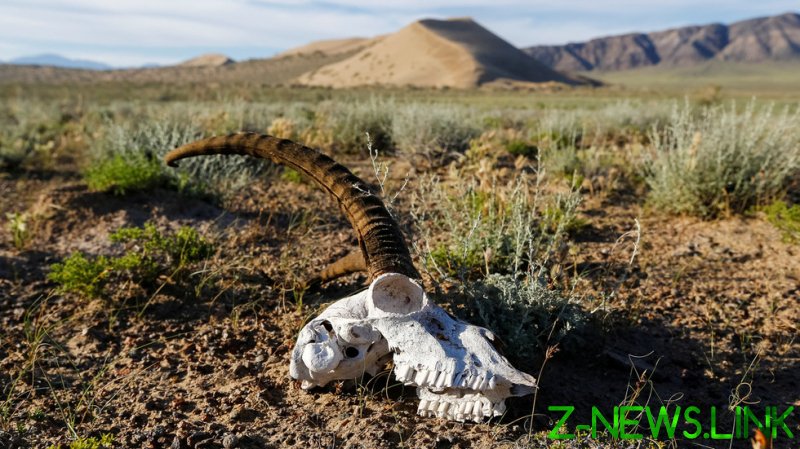 The reason for this intervention, which has come after the resignation of an agriculture minister and against the wishes of some farmers and exporters, is a severe drought in much of the west of the country. Following on from a dry winter, it has lasted for months and already inflicted great damage to pastures, the livestock depending on them, and the communities who, in turn, need the livestock.

The direct attribution of any single event to climate change may be challenging. But that is, frankly, an academic concern, because there is no doubt that Kazakhstan has already been affected and will be affected more by global warming. This much is reflected in numerous studies and recognized by multiple international organizations, from the UNDP to the WHO.

Of course, Kazakhstan is not alone. In neighboring Kyrgyzstan, for instance, in some areas farmers face the loss of their crops due to harsh conditions. There, agriculture workers have started demanding that the government keep at home not fodder but something even more essential: water. Until now, such calls have been resisted by the government. If Kyrgyzstan were to cut off water exports to other countries, Kazakhstan would be severely affected. In general, all of Central Asia is currently under intense pressure not only from the effects of the Covid pandemic, but also from unusual heat and water scarcity.

But Central Asia is not only suffering together (if, of course, with much regional variation); in water matters it can also only survive if it acts as one. While this is a region of five sovereign states with their own politics and cultures, as well as significant differences in their post-Soviet development, it has, in essence, only one water system.

To see why that would be a very bad precedent to set, think of Central Asia as a cluster of mountains with plenty of plains (relatively speaking, at least) attached. The key links between the mountains and the plains are the Amu and Syr Darya rivers. In essence, the two upstream countries have the mountains, the three others the plains. An estimated 80 percent of the region’s water supplies comes from those mountains. Conversely, the downstream countries ultimately depend for about 90 percent of their water needs on mountains that are beyond their borders.

As one study has put it, Central Asia’s mountain ranges are, in effect, its water towers. Yet despite the clear need for cooperation across borders, in general, experts agree, Central Asia has not yet found its way to a new, post-Soviet, integrated and long-term system of managing its water needs and resources, despite ongoing efforts.

But those attempts are vital. For if and when water becomes scarce, problems of unequal access are bound to get worse. When that happens, violence is close. In fact, in Central Asia, water has already led to some lethal conflicts, if comparatively small-scale ones. In the Fergana Valley, for instance, where the issue is compounded by ethnic diversity and complicated post-Soviet borders, hundreds have already died over the period of post-Soviet independence. Recently, a fierce clash between Tajikistan and Kyrgyzstan has been attributed to a conflict over a water facility.

Central Asia is, of course, of great importance whichever way you look at it. A region of a size greater than India, now home to around 75 million inhabitants, historically it used to be an essential part of the old Silk Road systems. Its post-Soviet period has seen diverging developments, with some economies showing overall growth, and others not so much. As a whole, the region has been increasingly integrated into the global economy, often via the export of commodities and energy.

And less than a decade ago, in 2013, China chose to announce the Belt (that is, overland) part of its Belt and Road Initiative (BRI) in Kazakhstan, signaling Central Asia’s key role for that new scheme of transcontinental trade and, in effect, integration. Several of the projected six main ‘corridors’ of BRIs depend on the Central Asian connection.

Yet even disregarding such aspects, we can also see Central Asia as a particularly concise example of problems that the world is facing as a whole – a sort of microcosm, if you will.

What gives the post-Soviet region’s water problems that sort of relevance are, in essence, two things: one is a legacy from the past, the other points to a future which has already begun. The past in question is from the USSR, and the future is global.

Concerning water, what the Soviet Union left behind in Central Asia was a legacy of lopsided and environmentally extremely wasteful economic development. The single most poignant example is probably the human-made post-World War Two desiccation of the Aral Sea, the fourth-largest lake in the world, by an unsustainable escalation of irrigation.

The Soviets also had their own system of managing, for better or worse, the region’s water between what were then five Soviet republics. The infrastructure they built for that purpose is still in place – for instance, the canal system that now risks running dry in Kyrgyzstan.

Yet it is wrong to imagine that the Soviet way of mistreating the only planet we have was unique. It may have been especially blunt and rigid, and we may be tempted to blame communism. But our descendants, looking back from, say, the year 2500, will be as bemused by our ideological obsessions as most of us are now when we think about Europe’s wars of religion a similar length of time ago in the past.

What future generations are more likely to focus on is what we all have in common now, namely the second key factor shaping the future of Central Asia: man-made global warming, giving us an overheated modern world built on industry, run on fossil fuels and the delusion that growth can be endless. That is what they will – rightly – blame for forests burning in Canada, Sardinia, and Siberia, towns drowning in Germany and China, and droughts hitting Central Asia and the American Midwest.

Kazakhstan may seem remote to many, but it may also be a harbinger of things to come – or rather, things that are already nearly upon us.

Tags about drought kazakhstan nobody should talking