Home / WORLD / ‘What a mess’: Neymar moans about Coupe de France final ban… then has wet towel hurled in face in cruel prank by Mbappe (VIDEO)

‘What a mess’: Neymar moans about Coupe de France final ban… then has wet towel hurled in face in cruel prank by Mbappe (VIDEO) 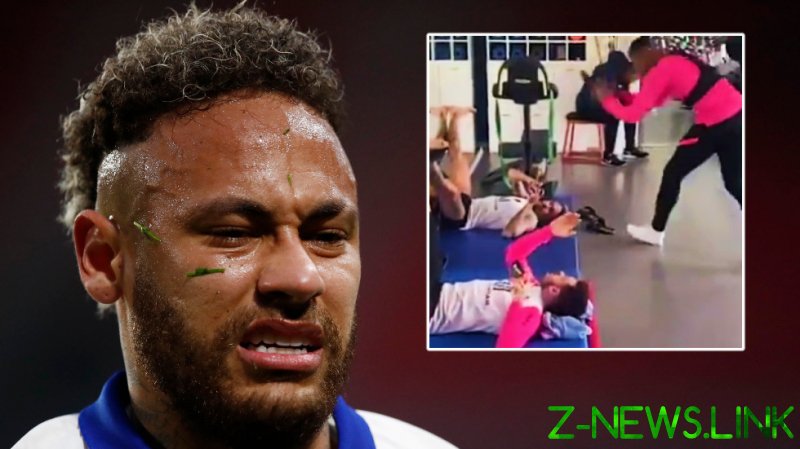 The Brazil playboy, who last Saturday signed a new four-year contract extension with the Ligue 1 giants, is being punished for a booking in the semifinal at Montpellier, which PSG won 6-5 on penalties on Wednesday.

After the hosts equalized following a Kylian Mbappe double, the world’s most expensive player was booked for catching Teji Savanier’s foot in the 90th minute, giving away a dangerous free kick on the edge of the box that Montpellier did not capitalize upon.

Embarrassingly for the 29-year-old, he had only been on the pitch a matter of minutes. His suspension was later confirmed for the final, although Paris plan to appeal.

“I would like to understand the reasoning of the guy who takes care of bookings in France,” an angry Neymar seethed on Instagram.

“That deserves applause. What a mess. Thank you for suspending me for the final.”

In another upload aimed more directly at referee Jeremie Pignard, he added: “I think it was personal. I play five minutes, I commit a foul and he gives me a yellow without even thinking.”

Asked why the striker had not started, coach Mauricio Pochettino said: “Neymar caught a cold, he had a cold and a little fever.

“He was not in the best conditions to start a match. If the game had been decided before, he would not have entered the game.

“But at 2-2, there were still a few minutes left; that’s why I put him on, because we could go to penalties.

“That was one of the reasons why he was on the bench tonight, even if it’s a pity that he took a yellow card.”

Back at the Camp des Loges training center, things went from bad to worse for Neymar when he was pranked by teammate Kylian Mbappe.

In the footage, the World Cup winner with France is filmed by a colleague dipping an item which seems to be a towel or sweatshirt in a bath to fill it with water.

He then sneaks through a gym room where several PSG stars are relaxing on mats and causes a loud noise by dropping it on Neymar and smacking him in the face with it.

“Is it me or is Ney always on bad end of a prank?,” asked one amused onlooker.

“Neymar did it to Mbappe the day before,” laughed another viewer.

“Nearly all the pranks at PSG are initiated by Neymar. Not the main reason the team adores him, but one of them. It’s never boring with Neymar.”

Taking a dig at his play-acting, a less impressed party quipped: “I’m surprised he didn’t grab his ankle and start rolling around like he usually does.”

A fellow critic joked that Neymar would be “injured for three weeks” as a result of the tomfoolery.