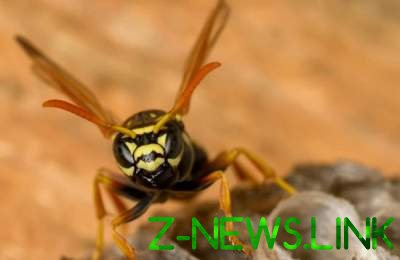 Wasps, has been considered to be more primitive relatives of bees, but in recent years scientists have found hints that they have extremely advanced for insects mental capacity. For example, in the beginning of this decade it was found that the wasps are able to remember and recognize faces of their fellows in the hive and to distinguish them from other, unfamiliar OS and their items. In the past, this ability was considered an exclusive feature of humans and higher primates.

In this case, the experiment was conducted on two types of wasps: Polistes metricus and Polistes dominula.

Safe for crawling insects on them the way were marked by well visible them with colored markers. Marks of other colors marked the way on which OS is danger was a shock. Colors indicating safe and dangerous routes, sometimes varied.

Colors change, as the scientists explain, was not random, but obey a simple logical patterns. The colors were arranged in a certain sequence, ABCDE, a position in which it was determined the level of relative “danger” of each color. For example, a corridor, marked B, was becoming dangerous, if the second passage was painted in C or E, but turned into a secure tunnel, if it coexisted with a hint of A.

The researchers tested whether wasps to unravel this sequence, the “training” them on several combinations of these colors, and then placing them in a beehive, whose aisles were painted in an unknown insect combination of colors.

“I was sure that the wasps, like bees, will not be able to reveal this logical hierarchy. But in reality it was not – they caught these hidden patterns in just six attempts and learned to understand the conditions under which a particular color designated dangerous or safe passage,” says Elizabeth Tibbetts (Tibbetts Elizabeth) from the University of Michigan in Ann arbor.

Scientists believe that these variations between bees and wasps are related to the fact that the hives last there is not one, but several “Queens”, the so-called founders of the colony. Each of them has its own “Suite” of daughters whose relationships within these families and the hive as a whole operates a complex system of domination and subordination.

This hierarchical organization of hives, according to the researchers, would be impossible if wasps did not possess the ability to visually differentiate between their relatives and the ability to make conclusions from this. This, in turn, suggests that the ability to think abstractly and to communicate with their own kind could arise from our ancestors not because of an increase in the size of their brain, and due to the fact that they began to live in large and complex organized groups, concludes Tibbetts.