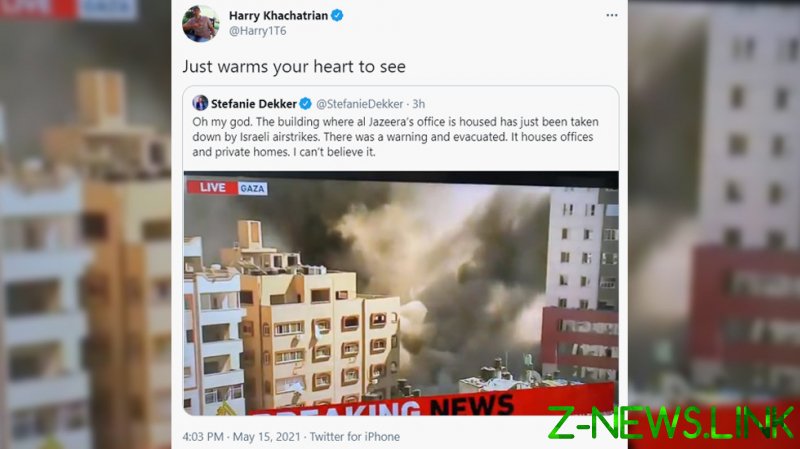 After videos were published on social media showing the destruction of the building by Israeli missiles, people from around the world – including many journalists – condemned the bombing, calling it terrorism, a war crime, and an attack against the free press.

Several high-profile conservative commentators in the United States, however, mocked the bombing and expressed their support.

Harry Khachatrian, a contributing editor for Ben Shapiro’s Daily Wire, claimed the video “just warms your heart to see” and is “a great start to the weekend.” He also accused Al Jazeera of creating “PR for Hamas terrorists,” and concluded all that was missing was “some music” like “Dancing in the Street.”

Upon being asked what he thought about AP’s offices being destroyed by the Israeli military, Khachatrian commented, “The AP will find a new building to work out of.”

Kurt Schlichter, a senior columnist for the conservative Townhall website, published several tweets laughing at the attack and calling the bombers “heroes,” while Stephen L. Miller – who has previously written for Fox News and National Review – posted a picture of a woman grinning.

Former US Acting Director of National Intelligence Richard Grenell made several posts defending the bombing by accusing AP of paying rent to a “Hamas front company.” Conservative podcast host Jesse Kelly framed the bombing of media offices as a fight against “communism,” tweeting, “Israel has done more to fight communism in the last 24 hours than America has done in years.”