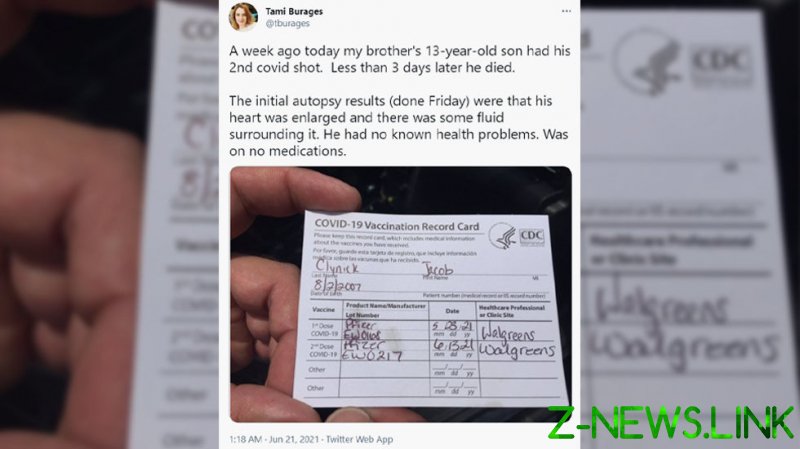 A Twitter thread went viral on Sunday after a woman claimed that her brother’s 13-year-old son had died less than three days after receiving his second dose of Pfizer’s Covid-19 vaccine.

“The initial autopsy results (done Friday) were that his heart was enlarged and there was some fluid surrounding it. He had no known health problems. Was on no medications,” Tami Burages wrote, with a photo apparently showing her nephew’s Covid-19 vaccination record card.

The card showed that the child, Jacob Clynick – born in 2007 – received his second dose on June 13 at a Walgreens three weeks after his first.

Burages said that she is “pro-vaccine” and knows vaccines are “mostly safe.” She also said that she had vaccinated her “own 14-year-old son as soon as it was available.” But she added that her nephew has died and that the Centers for Disease Control and Prevention (CDC) “needs to investigate.”

“There have been other cases of myocarditis in young men receiving their 2nd [Pfizer] shot. Have others died from it in the United States or is my nephew the first?” Burages asked, adding, “I think parents should be warned of the risk.”

CNN reported on Friday that at least seven young boys and men between the ages of 14 and 19 suffered from “a very rare type of heart inflammation” after being vaccinated against Covid-19. The young men recovered quickly after hospitalization, but health officials are now reportedly considering a link between cases of heart inflammation – known as myocarditis – and Covid-19 vaccines.

Hundreds of others, from teenagers to those in their 30s, have also experienced myocarditis and pericarditis following their second doses, with the CDC deeming the number of cases in 16- to 24-year-olds higher than expected, but still rare.

Dr. Cody Meissner, a member of the FDA’s Vaccines and Related Biological Products Advisory Committee, expressed concern over the long-term effects of myocarditis on young people earlier this month, warning, “Before we start vaccinating millions of adolescents and children, it’s so important to find out what the consequences are.”

CDC Director Dr. Rochelle Wolensky, however, attempted to reassure Americans during a White House press briefing last week that such cases are “rare” and “the vast majority have fully resolved with rest and supportive care.”

“My own children received the Covid-19 vaccine because vaccination is the best way to protect our adolescents, teens, and young adults from Covid-19 and its complications,” she continued. Dr. Wolensky added that the CDC “will present details about more than 300 confirmed cases of myocarditis and pericarditis reported to the CDC and FDA among the over 20 million adolescents and young adults vaccinated in the United States.”

A meeting between vaccine advisers and the CDC is scheduled to take place later this week after being delayed due to the new Juneteenth holiday.

In her Twitter post, Burages said she believed the vaccines are saving “millions of lives” but didn’t want any child to be a “sacrificial lamb,” adding that if her nephew had not received his second shot, “we believe he would be alive today.”

The posts received tens of thousands of likes and retweets and sparked a wave of concern over the safety of Covid-19 vaccination for children – though Burages still advised another user to get her 12-year-old granddaughter vaccinated following the ordeal.

The United States approved use of Pfizer’s Covid-19 vaccine for children as young as 12 last month and roughly 600,000 were vaccinated in the first week alone.