USA we take aim at Russia from the Pacific ocean 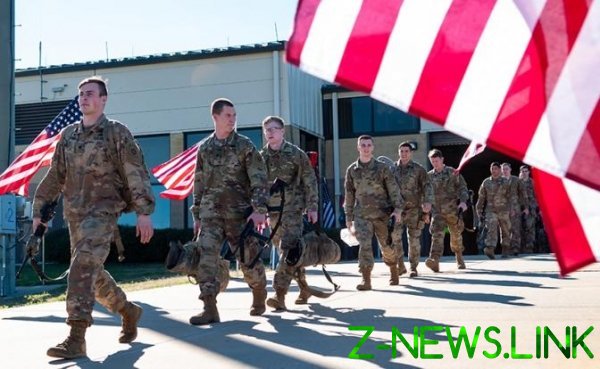 America intends to reflect a possible attack Russia and China on the distant approaches. For this the US army will deploy in the Pacific Islands of special forces, equipped with long-range and precision weapons, including hypersonic missiles. On this January 10, reported Bloomberg, citing the head of the Federal Agency, the office Manager of the U.S. army Ryan McCarthy.

“This step is designed to neutralize all investments already made by China and Russia,” he said. According to him, the special forces will focus on carrying out cyber attacks, but also to conduct information warfare. In addition, if threats can strike at sea and ground targets

McCarthy stressed that, if such parts are located on the Islands East of Taiwan and the Philippines, which would make it easier for land for road construction for the Navy and the U.S. air force.

He added that the deployment in the Pacific, new army units will be accompanied by the strengthening of cooperation with the National Agency and the military space intelligence of the USA (National Reconnaissance Office, NRO), making of special forces will be able to receive data from satellites.

Bloomberg notes that the military doctrine of the PRC is built on a strategy of resistance in which aircraft carrier strike groups the US planned to keep away from the Chinese coast to the imposition of anti-ship missiles. Fearing attacks, the carriers must cross “the first and the second Islands chain”, extending to GUAM, Borneo and New Guinea.

However, the emergence of the Islands above-ground parts can change the balance of forces, and, according to McCarthy, will create a new paradigm in the Pacific — will allow you to “punch a hole” in the defense of China.

This step corresponds to the plans of the Pentagon, Mark Esper of the transfer of forces to the Pacific from Europe, Africa and the Middle East to strengthen the military capabilities of the United States in the confrontation with China and Russia, writes Bloomberg.

We will remind, in the summer of 2019, while still a candidate for the post of defense Minister, Esper said that the United States in the near future need to set “full control over all Russian nuclear Arsenal”, including tactical warheads. This is necessary to conclude a new version of the Treaty on the limitation of strategic offensive arms (SNV-3).

Speaking at the hearings in the Senate, a candidate for the position of head of the Pentagon also called “strategic adversary” of the United States in all regions of the world. In addition, he promised “if necessary” to provide military assistance to Ukraine and has called nuclear weapons a major deterrent to Russian aggression.

Now, apparently, plans to curb specified. What are the benefits given the island’s special forces to the Americans, do they create an additional threat to Russia?

— The US has a huge military budget, and its need to apply — said the military expert, retired Colonel Viktor Litovkin. — But how? Is no war, NATO allies have bought up so many American weapons as he could. That means we need to come up with theories that justify the building of new military structures and justify new orders MIC.

The Americans now tell as from the Islands in the Pacific ocean they will fire on Chinese ships and protect the sea route. But you have to understand: these stories are designed for the unsophisticated audience.

In reality, if it comes to hostilities between U.S. and China, the course will not laser guns not precision weapons, and Intercontinental ballistic missiles. And then the U.S. will remain a wet spot — I stress that even if the enemy Americans are not Russia, and China.

But such a scenario is not on the real agenda, can tell stories. As neutralino, using the island’s special forces, America will stop in the Taiwan Strait, the Chinese military ships. Or how to control the Strait of Malacca and almost the entire Pacific ocean.

And as thus, the United States will not develop neither Russia nor China will be to hold them back.

“SP”: — When the United States talking about the placement of forces on the Pacific Islands, does this mean that there will be new military bases?

— Of course, this can be called military bases. But, notice the Americans in this area are already very large base.

This is pearl Harbor on the island of Oahu (Hawaii), where most of the harbour and adjacent areas occupied by the base of the Pacific fleet of naval forces of the United States. In addition, it is base on the Japanese Okinawa. On this island part of the Ryukyu archipelago, account for about 74% of us military facilities and US troop levels in Japan.

Now the Americans say that special forces will be located to the East of the Philippines. If you look at the map, we can see: it’s either GUAM or the same Hawaii. On GUAM, I note, the Americans also deployed two major military facilities — air force base Andersen naval base and the “apres-Harbaugh”, which are the Pentagon’s strategic importance.

At Andersen based long-range bombers and submarines capable of carrying nuclear weapons and infrastructure base allows it to accept any class of aircraft, including strategic bombers B-52, B-1 Lancer and B-2 Spirit. From the airbase “Andersen”, the U.S. air force have the opportunity to put missile and bomb strikes on targets along the entire Pacific coast of mainland Eurasia.

Naval base APRA Harbor on the West coast of the island in size is second only to pearl Harbor in Hawaii, and is one of two major facilities of the U.S. Navy in the Pacific.

To the East of the Philippines where the Americans will find a place for another military base — I don’t know. But we are talking about the militarization of this area — close to the Hawaiian archipelago.

“SP”: — Why the United States additional island base? They are cheaper than, say, carrier battle groups, or more effective?

— Not the case, and serious the Americans bases to fence is not going to. They, I believe, just need to attach somewhere medium-range missiles, which the United States is advertised.

Recall that in mid-August, the US tested a cruise missile, medium-range, and three months later ballistic. These missiles the Americans want to contain China, and these rockets want to trade with China and Russia.

But all this, again, only the shell is the basic problem: necessary to attach a military budget that the US has more than the rest of the world combined.

“SP”: — So, the special forces of US Ground forces on the Islands — not the situation, on what Russia should react?

On 10 January a meeting of the defense Ministry, which discussed the main directions of activities of the Department in 2020. And defense Minister Sergei Shoigu, one of the main tasks called tracking the deployment of US intermediate-range missiles.

On the US actions in the Pacific, of course, will react — but primarily in the information space. In reality, fundamentally new steps the Pentagon are not, and on the alignment of forces has not fundamentally affected.