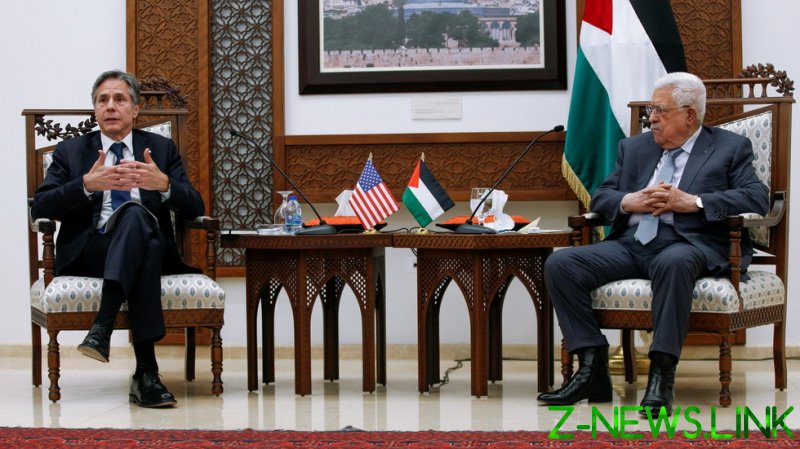 The announcement was made after Blinken’s talks with Palestinian President Mahmoud Abbas in Ramallah in the occupied West Bank on Tuesday.

“The US will go forward with the reopening of its consulate in Jerusalem. This is an important step,” the secretary of state said.

The Biden administration is committed to “rebuilding the relationship with the Palestinian Authority and the Palestinian people, a relationship built on mutual respect and also a shared conviction that Palestinians and Israelis alike deserve equal measures of security, freedom opportunity and dignity,” Blinken added.

According to Blinken, the US opposes any unilateral actions that could undermine peace between the Israeli and Palestinians, including “settlement activity, home demolitions, annexation of territory, incitement to violence or compensation of individuals who committed acts of terror.”

Speaking alongside Blinken at a press conference after their talks, Abbas thanked the US administration for its support for a two-state solution, adding: “We hope that the future is full of diplomatic activities led by the US and the Quartet [the US, EU, Russia and UN], so as to reach a just, comprehensive solution based on international law.”

The consulate, which for decades served a key role in US diplomatic relations with Palestinians, was closed in 2019 by Trump. Its functions were passed on to the US ambassador to Israel when the US embassy was controversially moved to Jerusalem. The city is claimed as capital by both Israelis and Palestinians.

Reopening the consulate was one of Joe Biden’s campaign promises during last year’s presidential race. Blinken didn’t specify when exactly the consulate will be operational again.

The secretary of state said that Washington will provide $75 million in development and economic aid to Palestinians in 2021, as well as $5.5 million in immediate disaster relief for Gaza and $32 million to UN Palestinian aid agency, UNRWA.

During his earlier meeting with Israeli Prime Minister Benjamin Netanyahu, Blinken stressed that Washington would work with its partners “to ensure that Hamas doesn’t benefit from the reconstruction assistance.”

Gaza was heavily battered by Israeli airstrikes while Hamas fired hundreds of missiles towards Israel during a recent 11-day conflict, in which more than 250 people – mainly Palestinians – were killed.

Blinken is set to travel to Egypt and Jordan as part of his Middle East tour this week.