Home / WORLD / Under the cover of Covid: Outdoor smoking bans in UK are the next phase of an authoritarian project launched 20 years ago

Under the cover of Covid: Outdoor smoking bans in UK are the next phase of an authoritarian project launched 20 years ago 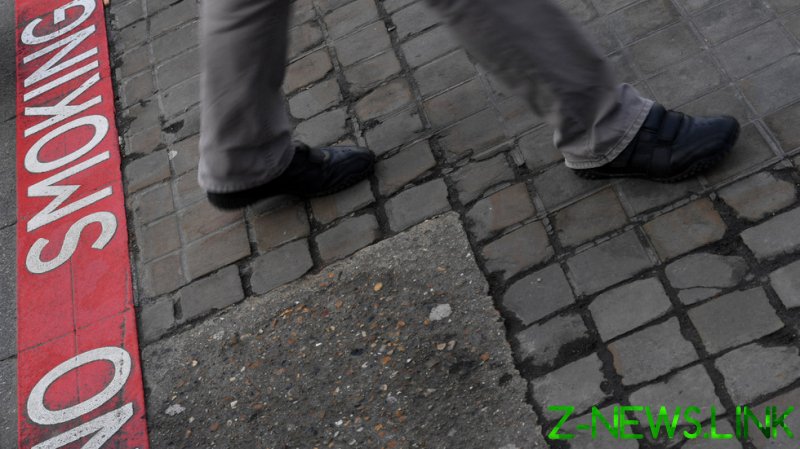 Oxford was described by the poet Matthew Arnold as the “home of lost causes”. Let’s hope that proves true, because much of what is currently coming out of the university city – and its county – isn’t good at all.

Climate change alarmism? In 2019, Oxford City Council declared a ‘climate emergency’ and, in February,  a summit co-ordinated by the council, declared its ambition to reach ‘net zero carbon’ by 2040 at the latest. From August 2021, only ‘100%-zero-emission vehicles’ will be able to be driven in the city’s central ‘zero-emission zone’ free of charge.

Oxford wants everyone to go electric, whatever the cost and inconvenience. But that’s not all it wants.

Having targeted motorists (parking in Worcester Street car park costs an eye-watering £9 for just two to three hours, and £18 for four to six hours), Oxfordshire’s councils are now taking aim at smokers.

This week, Oxon unveiled plans to become the first county to ban smoking outside restaurants and offices. The plan, which was actually approved back in May 2020, is to make Oxfordshire ‘smoke free’ by 2025. Democratic mandate?

The county’s strategy was based on a public consultation running for just one month (from March 11 to April 11, 2020), in which just 233 responses from residents were forthcoming. Out of these 233 responses, 64% supported a ‘Smoke-free Oxfordshire’.

So, the policy is being pushed through after just 149 people from a county with a population of 687,466 said ‘yes’. That’s 0.02%. Justifying the strategy Ansaf Azhar, Oxfordshire’s public health director, said that banning smoking was “not about telling people not to smoke”. Really? Instead, it was about “moving and creating an environment in which not smoking is encouraged and they are empowered to do so”.

If you want an example of authoritarian measures being ‘sold’ in touchy-feely language that makes it look as if freedoms are actually being enhanced, you really could do no better.

And it’s not just Oxfordshire where outside smoking bans are to be introduced. ‘Smoke-free strategies’ are spreading like wildfire – no pun intended. Five other councils are stubbing out outside smokers: Northumberland, Durham, North Tyneside, Newcastle and the City of Manchester. All are taking their lead from central government, which has declared its ambition of a ‘smoke-free’ England by 2030.

When the ban on indoor smoking was introduced in 2007, I warned – in the Guardian, Britain’s flagship liberal newspaper – that it marked the death of liberal England. And so it has proved. “Whatever your views on smoking (and no one denies that the habit, like the officially approved New Labour ones of drinking, overworking and starting illegal wars, carries a health risk), ask yourself this simple question: Do you really want to live in a country where lighting a cigarette, cigar or pipe in a pub or café, as English men and women have done for decades, is deemed a criminal offence?,” I wrote.

The supporters of the 2007 ban assured us that people would still be able to smoke outside, but I knew this too would come under threat. “Don’t kid yourself Sunday’s ban will be the end of the matter,” I predicted. “The anti-smoking zealots won’t rest until smoking is banned everywhere, even in the privacy of our own homes.”

The smoking bans of the mid-to-late 2000s were about much more than smoking. They were a test case to see how far the authorities could go down the road of destroying personal choice and freedom and introducing a controlled society in which genuine individualism was stifled and everyone would be expected to conform to new, politically correct state-approved ‘norms’. Right thought, right opinions, right behaviour. ‘You smoke slim panatellas? What are you? Some relic from the early 1970s? I bet you also have some pretty old-fashioned views on other things, which need some re-education’.

‘Re-education’, of course, means censoring the past. Note that in the new ‘Cruella’ film, the title character has been deprived of her trademark cigarette holder. “This is not allowed in 2021,” actress Emma Stone told the New York Times. Even James Bond, a chain-smoker in the original books and earlier films, is not allowed to smoke any more.

Yes, we all know smoking – particularly heavy smoking – can be very harmful to health. But isn’t there something quite fanatical and, indeed, rather disturbing, about the way it’s not only being banned but airbrushed out of history? In free societies, it should be up to the individual if, having weighed up the risks, they decide to light up, not the state or the local council. Free societies mean citizens make their own decisions. The same applies to drinking beer, eating chocolate and sugary foods, and gambling. Once the state starts banning things, we’re on a very slippery slope indeed – one that leads to prison camps or worse.

As proof of the direction of travel, we can trace a direct line between the authoritarians behind the smoking bans of 15 or so years ago and the current draconian Covid-19 restrictions.

The first country to ban smoking in all pubs, restaurants and workplaces was the Republic of Ireland, in 2004. The country’s health minister at the time was one Micheal Martin. Seventeen years on, Martin is Ireland’s taoiseach and the leader of a country that has endured one of the harshest and longest lockdowns in the world. The UK prime minister when the 2006 Health Act was passed that banned smoking in enclosed public spaces was one Tony Blair, who’s now advocating vaccine passports. Bill Gates, a leading figure in promoting Covid restrictions – and whose foundation has funded the Tony Blair Institutefor Global Change – has been a major supporter of ‘anti-smoking initiatives’. In Victoria, Australia in 2008, smoking was banned in cars in which children were travelling. The state’s health minister then? One Dan Andrews. Two days ago, under Andrews’ leadership, Victoria’s latest Covid lockdown – its fourth – was extended.

You see, once you start to restrict people’s freedoms on the grounds of ‘public health’, it’s hard to stop. Next you’ll be locking down entire countries. The lesson of history is that authoritarianism is even more addictive than smoking, which is why it’s best to stub it out at the outset.