Ukraine will start the month of voluntary surrender of weapons 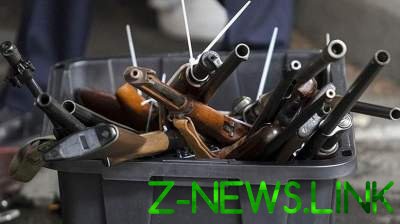 The people who voluntarily surrendered weapons are exempt from criminal liability.

In Ukraine October 2017 will be a month of voluntary surrender of weapons.

The maximum penalty for illegal possession of weapons – imprisonment from 3 to 7 years.

But if within this month the citizens voluntarily surrender weapons and ammunition that are stored illegally, then they are exempt from criminal liability.

Head of Department of control over arms trafficking Vyacheslav Savchenko noted that the purpose of the month is the removal of illicit trafficking of arms, ammunition, explosives and special means, as well as other hazardous materials.

“To this end, citizens can contact the Department of national police territorial divisions of Department of control over the circulation of weapons in Kiev, citizens may apply at any time,” – said Savchenko.

Also the police added that in April, when also held this month, citizens are actively handed over their weapons.

“While his conduct was put a large number of weapons – more than 570 units, this cut samples of army, hunting, cold, was also commissioned a large number of grenades, ammunition, shells, more than 10 thousand cartridges of various calibre” – added Savchenko.