Ukraine on its knees in front of Russia – ex PM 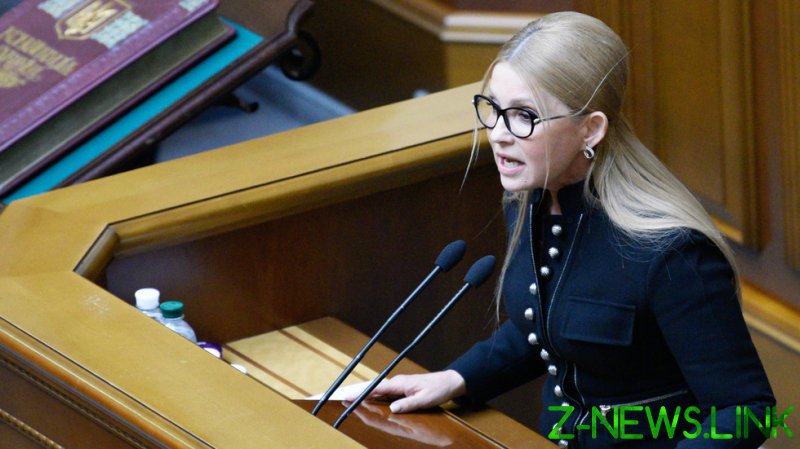 Speaking in an interview with Nash TV Channel, Yulia Timoshenko, who now sits as an opposition MP, claimed that Ukraine has neither extracted its own gas nor planned to use its own coal supplies.

“All of the essentials needed for the heating period have not been provided, which means that we have been practically brought to our knees,” the ex-prime minister claimed, remarking that Kiev is fully dependent on Moscow and Minsk.

“The whole government should count on prayers that Ukraine won’t be plunged into -10 degrees or lower this winter,” Timoshenko went on. “The second thing that they hope for is that they will import electricity from Russia and Belarus. And they already do,” she said.

In an interview on Saturday, Ukraine’s current Prime Minister, Denis Shmyhal, revealed that his country’s government is looking to extend its gas transit contracts with Moscow for another 15 years. Under the current deal Russia exports supplies across the aging Soviet-built overground network and pays billions of dollars for transit rights.

Kiev has repeatedly warned that it could lose access to the vital stream of revenue once the now-completed Nord Stream 2 gas pipeline, which circumvents the country, begins pumping supplies to Western Europe. However, certification of the link was suspended last week until the company reorganizes itself in accordance with German law.

Ukrainian Foreign Minister Dmitry Kuleba claimed in the wake of the Moscow-Berlin venture’s suspension that the delay was thanks to his government’s lobbying. “Nord Stream 2 should have been operating and earning money a long time ago, but the fact that it still does not work and we are fighting against it is the result of our common efforts,” he said.

Russian President Vladimir Putin, however, has insisted that there are no plans to choke off supplies to the Eastern European nation. The head of Ukraine’s state-run energy firm Naftogaz, Yuriy Vitrenko, however, has previously warned that the new project increases the chances of a “full-scale war” between the two countries. Putin said that “despite all the complexities related to Russian-Ukrainian relations today,” Moscow would not weaponize energy exports.