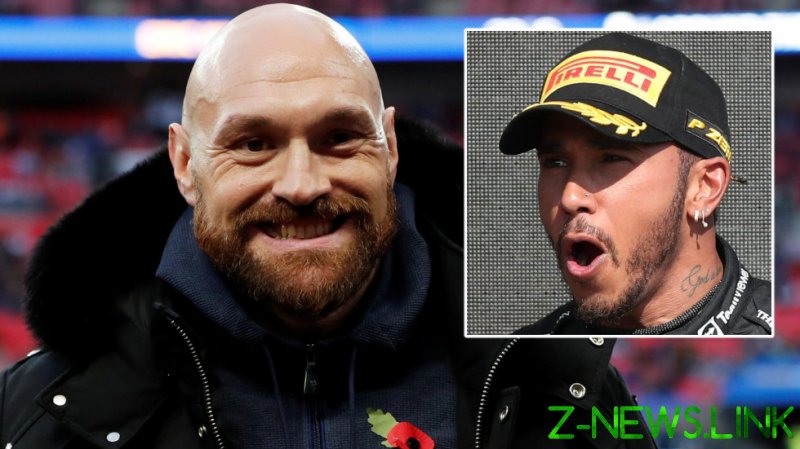 Fury, the undefeated WBC heavyweight champion of the world, has won every major title available to a fighter in the sport’s most high-profile weight class, but says that he is yet to receive the type of recognition he feels his efforts in the ring have deserved in the UK.

The Briton has yet to feature on the Queen’s end of year honors list, despite arch-rival Anthony Joshua having been awarded an OBE by Buckingham Palace in the past.

However, Fury’s run through boxing’s heaviest weight class has received far more fanfare in the US. His win earlier this year against Deontay Wilder was enough for him to be awarded his second ‘Fighter of the Year’ award from The Ring Magazine, and he was recently named ‘Boxer of the Year’ at ABC’s ESPY awards.

Seeing his peers earn plaudits from the press seems to have rubbed Fury the wrong way, after he told the Daily Mail that “unlike Lewis Hamilton, I live and pay taxes [in the UK] which went up to £9 million [$12.4 million] last year.”

Hamilton, meanwhile, has addressed tax-related rumors in the past by saying that he does pay tax in the UK – as well as the various other countries in which he races.

Fury has been hailed in some section of the media for championing mental health awareness after admitting in recent years that he struggled with depression, and has been informed by charities that his work to raise awareness for the issue has likely saved lives.

Fury has said that he believes fellow Brit boxer Amir Khan has also not received the recognition he deserves, despite crediting him with “reviving British boxing and doing fantastic charity work in both Britain and Pakistan.”

But does this bother him? “No,” he said. “Just disappointed. The way you are when someone close to you lets you down.”

This isn’t to say that Fury has been entirely ignored by the UK’s awards establishment. ‘The Gypsy King’ asked to be removed from the nominations list last year for the BBC ‘Sports Personality of the Year’ award after his nomination for the same prize in 2015 led to accusations of homophobia and sexism owing to some of his past comments.

The winner in 2020 in Fury’s stead? Lewis Hamilton.

Fury had been expected to rematch Deontary Wilder for a second time in Las Vegas on Saturday night before the fight was postponed until October 9 following an outbreak of Covid-19 in Fury’s camp – and he refused to apportion any blame for the cancelation.

“I’m the last person to blame,” said Fury of the outbreak. “I don’t have a large entourage, unlike most world champions with all their ass-licking hangers on. Since coming back into full time camp, I hadn’t been anywhere other than my new house here and the Top Rank gym. Nor had my team.

“The only people whose movements I couldn’t completely control were my sparring partners, who change. They came in and out of the bubble and everyone knows this town is full of Covid. I suspect we caught it from one of them.”