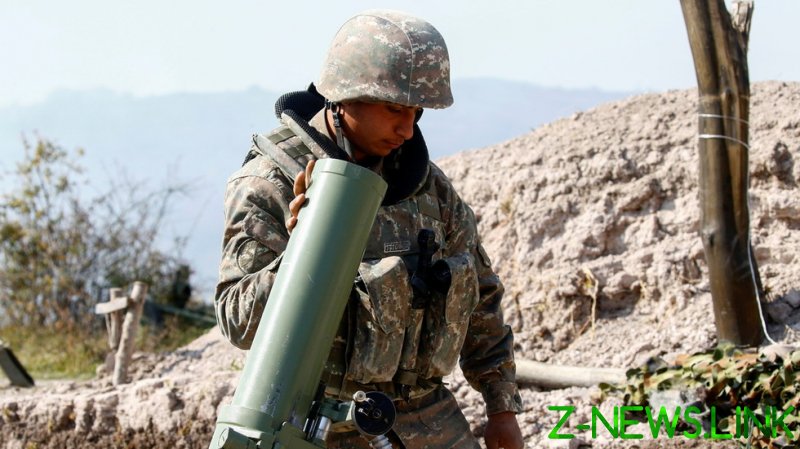 “We’re working with Armenia. We have a very good relationship with Armenia. They’re very good people. They’re so dedicated. They’re incredible people. And we’ll see what happens,” Trump told reporters at the White House on Friday afternoon, as he announced a peace deal between Sudan and Israel.

Azerbaijani Foreign Minister Jeyhun Bayramov and his Armenian counterpart Zohrab Mnatsakanyan were in Washington, scheduled to meet – separately – with US Secretary of State Mike Pompeo on Friday to discuss the ongoing conflict in the disputed region.

Asked if he met with either of them, Trump replied, “I don’t want to say. But we’ll see what happens. I think really good progress is being made.”

Shortly after his remarks were broadcast, however, reports came of the Azerbaijani shelling of Stepanakert, the capital city of the self-proclaimed ethnic Armenian republic in Nagorno-Karabakh.

The region, populated mainly by ethnic Armenians, seceded from Azerbaijan in the 1990s. The fighting that broke out at the end of September, for which both sides blame the other, has been the most intense since the 1994 armistice.

Two humanitarian ceasefires brokered by Moscow in the past two weeks quickly collapsed, and there have been reports of Azerbaijani forces making headway towards the border of Armenia proper.

Azerbaijan insists Nagorno-Karabakh is “occupied territory,” and is relying on support from Turkey in the current push to resolve the conflict through military means.

The US finds itself between treaty obligations with Turkey – a NATO ally, though that relationship has been troubled in recent years – and the political pressure of the Armenian diaspora.

“We have a lot of people living in this country from Armenia originally … and they’re great people,” Trump told reporters. “We’re going to help them.”

On Friday, 50 members of Congress sent a letter to Pompeo demanding sanctions against the Azerbaijani leadership and accusing Baku of violating human rights and laws of war.

The Democrats spearheading the initiative have enough votes to get it approved in the House of Representatives, but it remains to be seen whether it will be approved in the Republican-majority Senate, as Democrats there are attempting to filibuster a nomination to the US Supreme Court.