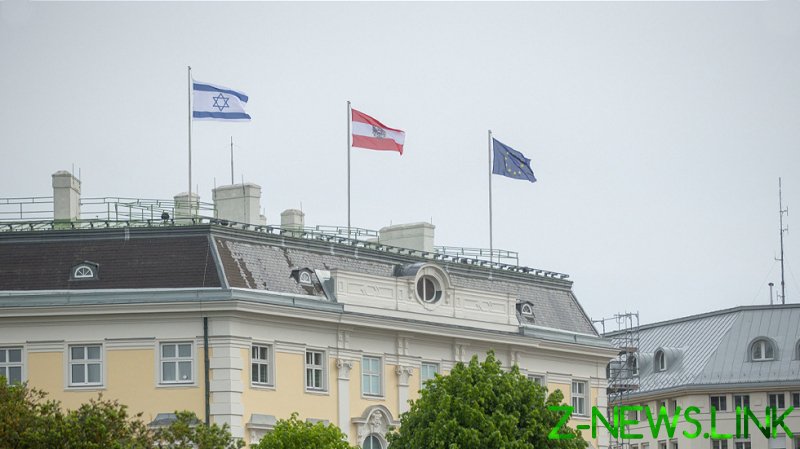 “Today was used as a sign of solidarity with #Israel the Israeli flag is hoisted on the roof of the Federal Chancellery,” Austrian Chancellor Sebastian Kurz tweeted on Friday, adding “the terrorist attacks on Israel are to be condemned in the strongest! Together we stand by Israel’s side.”

His post, accompanied by a photo of the country’s Chancellery flying the Israeli flag, while supported by some, has drawn extensive criticism on social media, leading some to question ‘Austrian neutrality’.

“If you don’t see the shameful facts and stand by Israel, you are at least as cruel and merciless as Israel,” one person wrote, adding that Vienna must be blind not to see this.

Many others highlighted that Israel’s attacks on alleged terrorist positions in Gaza were illegal under international law and urged Vienna not to support such criminality. One individual called on Kurz to “think carefully who the terrorist is here,” referencing to decades of Israeli occupation.

Several users responded with photos of innocent women and children injured by Israel’s assaults on targets in Gaza. One added sarcastically, “Austria stands by the side of innocent civilians and their children! Oh wait, nobody cares about you.”

However, Kurz’s tweet was also welcomed by many, including the son of Israeli Prime Minister Benjamin Netanyahu. Yair Netanyahu simply wrote “thank you,” accompanied by the flags of Austria and Israel.

Some Twitter users defended Vienna, noting “Neutrality does not apply to terrorist organizations. The question alone is insane.”

Others called on the EU to follow Austria’s lead and support Israel against Palestinian terrorism, with some blaming Hamas for the Palestinian deaths attributed to Israel.

The escalating conflict between Israel and Palestinian militant groups this week, amid the backdrop of unrest in the Palestinian community, has drawn polarized reactions across the world.

Israeli violence against Palestine has been widely condemned in the Muslim world, while many international organizations as well as world leaders called for de-escalation.

The Israel Defense Forces (IDF) said on Friday that “it’s time for the world to hold Hamas accountable.”

The IDF claims that Hamas has misfired more than 350 rockets in the last three days, many of them landing in Gaza, “resulting in the deaths of innocent Gazan civilians.”