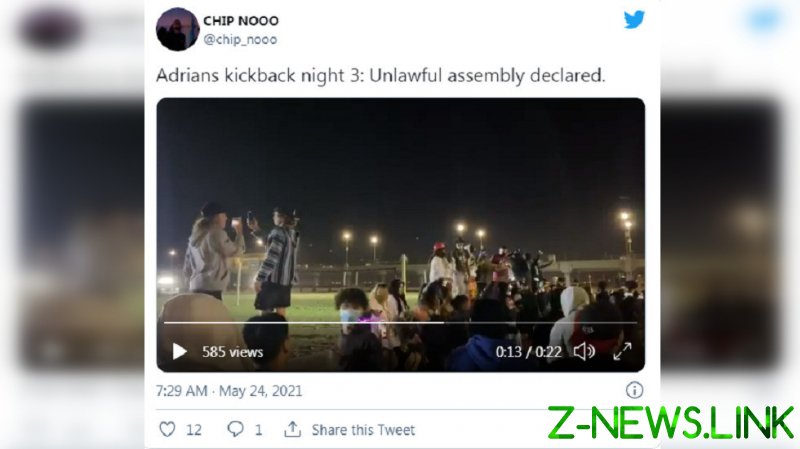 Footage posted to social media shows a crowd dancing to loud music on Sunday night, apparently undeterred by the mayhem that occurred just one evening prior. Police were later deployed to the area, according to an eyewitness report. In a tweet, the Huntington Police said they had stepped up their presence in the downtown area in response to a gathering of around 150 people, and that they were monitoring the situation.

This comes one day after a massive party ended in almost 150 arrests. Those taken into custody face a list of charges, ranging from vandalism and hurling fireworks at officers, to violating the curfew and refusing to disperse on their own accord. Police reportedly used crowd control munitions in an effort to restore order.

People started flocking to the beachside town after a post went viral on TikTok, inviting anyone who wanted to attend a birthday bash, called “Adrian’s kickback,” to Huntington Beach. The video was originally uploaded by user adrian.lopez517 and it was not before long it was propelled to viral status by TikTok’s algorithms, according to VICE.

Although the video can no longer be found on the user’s TikTok account, which is now empty despite having 224,000 followers, the hashtag #adrianskickback has since been viewed 258.2 million times.

Several TikTokers posted videos and photos of them driving and even flying to the party for hours on end. One TikToker claimed he was traveling from Detroit, while another said that they drove “15 hours to Adrians party.”

Huntington Beach police were aware of the party as well, saying they were “taking significant steps to prepare for the potential influx of visitors.” However, all the precautionary measures failed to stop the gathering from descending into chaos on Saturday.

After calls to disperse fell on deaf ears, police imposed an emergency curfew that went into effect at 11:30pm on Saturday. However, that did little to dissuade the unruly crowds of revelers from wreaking havoc in the streets.

Fights broke out between the attendees, some were seen dancing on top of cars, while others threw fireworks at officers. It’s unclear if ‘Adrian’ even attended the party.