Home / WORLD / ‘There is no comparison’: Marjorie Taylor Greene backtracks after equating mask mandates with Holocaust

‘There is no comparison’: Marjorie Taylor Greene backtracks after equating mask mandates with Holocaust 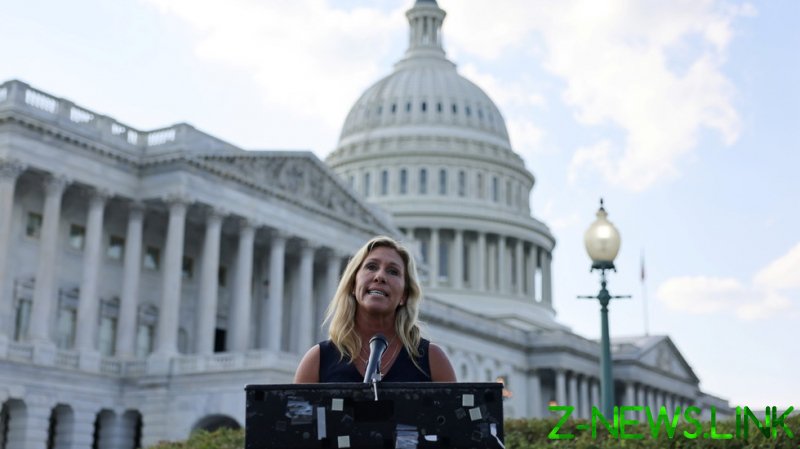 Greene held a brief presser after visiting the US Holocaust Memorial Museum in the nation’s capital on Monday, saying her previous comments had “bothered” her for weeks and that she wanted to “own” her error.

“This afternoon, I visited the Holocaust museum. The Holocaust is – there’s nothing comparable to it. It happened, and over 6 million Jewish people were murdered,” she said.

The lawmaker stirred controversy last month after equating masking rules with the gold stars Jews were forced to wear during the Holocaust, suggesting both had created “second-class citizens.” She later said much the same about vaccine requirements, claiming they were “just like” the Nazis’ ‘Juden’ stars.

The comparisons triggered major backlash, including from Jewish groups as well as top members of her own party, such as House Minority Leader Kevin McCarthy. Democrats also condemned the remarks, with Illinois Rep. Brad Schneider introducing a resolution to censure Greene over them in late May.

“Rep. Marjorie Taylor Greene continues to debase not only the memory of 6 million Jews murdered by the Nazis, but all those who fought and died defending Democracy against Hitler and his evil,” Schneider said in a statement at the time.

Greene’s Holocaust comments were not the first to land her in hot water, with lawmakers voting to strip her of her committee assignments in February over a number of controversial statements made on social media and elsewhere, most before she was elected, including voicing support for the ‘QAnon’ conspiracy community and a number of eccentric theories.

Greene also walked back some of those previous claims, saying in February that she allowed herself to “believe things that weren’t true,” adding “when I started finding misinformation, lies, things that were not true in these QAnon posts, I stopped believing it.” That failed to stop fellow reps from booting her out of her committee roles, however, and so far there’s no sign Greene’s latest apology will convince House Democrats to halt their censure vote set for Wednesday.