‘Their’ Union? Palace mulls sending Prince William & Kate to Scotland to ‘save UK’, amid fears of new indie referendum – reports 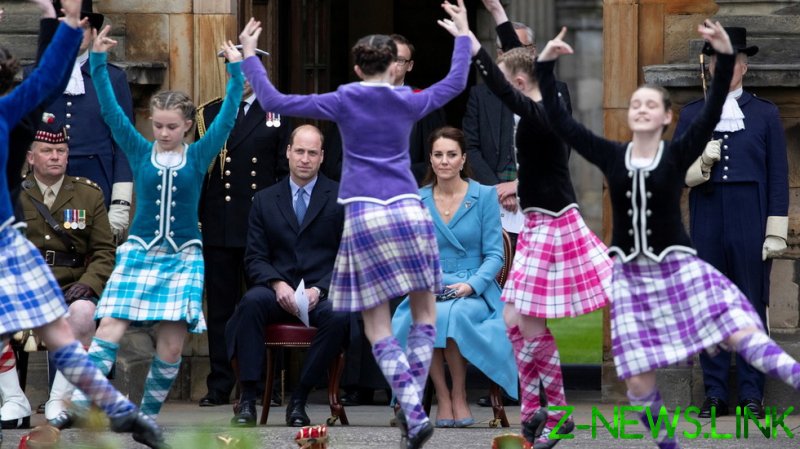 “They think of it as their Union,” a source close to the royal household told the Sunday Times. The strategy allegedly drawn up by the royal aides includes William and Kate building on the success of their recent visit to Scotland by spending more time there, and becoming a “symbol” of the ties it has with England.

According to the Sunday Times, the Royal Palace officials believe the issue cannot be left in the hands of politicians because it is they who “have been losing” Scotland so far.

The purported plan was apparently a reaction to the results of the Scottish parliamentary elections in May. Scottish First Minister Nicola Sturgeon is vowing to “lead Scotland to independence” regardless of what London says, after she won a pro-independence majority.

William and Kate visited Scotland in late May, during which trip the Duke of Cambridge shared some of his personal memories with the public and said Scotland had “shaped” him and was “so important” to both him and his wife.

“The abiding affection I feel for it is rooted in my experience of its everyday life – in people, relationships, and its ethic of neighbourliness,” Prince William said at the closing ceremony of the General Assembly of the Church of Scotland, praising the country and its values.

The duke also met Sturgeon and the Liberal Democratic MP for Orkney and Shetland, Alistair Carmichael, during his visit. Kensington Palace said, “Prince William has spoken to a broad range of people from different communities, including politicians from across the political spectrum.”

On the last day of their visit, the Royals also met with former UK prime minister Gordon Brown and his wife Sarah at the Queen’s official Edinburgh residence, Balmoral. Brown, who played a key role in the pro-unity camp during the 2014 independence vote, recently announced the establishment of his think tank, dubbed ‘Our Scottish Future’.
The think tank would be a “campaigning movement” that would reach out to “middle Scotland”, Brown said.

The involvement of the royals in the independence debate has been a sensitive issue from the start, since ‘the firm’ had been expected to keep neutral on the issue. However, if social media reactions are any indication, the new plan may already be backfiring.

The initiative apparently found little support on Twitter, with people suggesting the Royals’ increased involvement in politics would not just encourage pro-independence sentiments but prompt the Scots to make their country a republic as well.

Some people reacted by saying the only concerns of the Royals were whether Scotland would remain a monarchy, and its political status and real governance should be none of their business.

Others suggested that addressing the real concerns of the Scottish people would have a much better effect on the public mood than sending what they called “royal mascots.” There were also those who said that involving the royals in the debate would only “poison” the monarchy’s own image in Scotland without influencing the public opinion on independence.

Scottish MP Stewart McDonald, who is also the SNP spokesman for Defense, said in a tweet that “William and Kate are always welcome in Scotland, but it would be naive in the extreme to think that increased visits will satisfy the growing consensus for independence.”

The Scottish former first minister, Alex Salmond, meanwhile, accused the Duke and Duchess of Cambridge of “poor judgement” over meeting Brown. The leader of the nationalist Alba Party, Salmond, argued that the Royals must stay out of the independence debate.