Home / Society / The victim complex. A large number of disgruntled citizens is not equivalent to protest potential 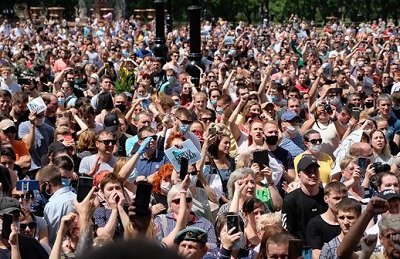 It is well known and officially recognised that the real incomes fall for the sixth consecutive year. No pandemics and quarantines. According to opinion polls the overwhelming majority of respondents experiencing irritation aimed at the Federal government and Putin personally. Moreover, the intensity of aggression is distributed from irritation hard to dislike.

However, some portion of the Russian population still actively or passively support the current regime. Who are these people? First, it is the millions of officials and employees of power structures. Never in the years of the Communist regime, they had no such license, such license to tyranny and that kind of money – due to the possibility of the conversion of power into money. Try to imagine the weaver-deputatsha the Brezhnev era to the Villa in Miami. Plots from the party-state nomenclature of those years was as all – 6 acres. And model cottages, like everyone else, from the “doghouse”.

Secondly, the regime is supported not only by the oligarchic circles of big capital, but also the millions of employees of corporations in the commodities and the financial sector receiving high wages. Thirdly, the current situation suits many businesses. Talk about the fact that “the power of a business nightmare” apply only to those who are trying to do business honestly. Yes, the number of cases of “economic” articles of the criminal code increased. But everyone understands that it’s not about “crimes” and “rule of law” and that “the parties agree” or about the accounts of some persons or groups with others – “with the help of the law.” In the rest of the long-established symbiosis on the principle of “everything is under control, everything is paid for”.

For example, there is no economic justification for the insane prices for food products. In Europe, the trading margin is only 10%. The maximum level of profitability needs to tightly control the Federal Antimonopoly service – FAS. That is the state. Where is it when shopping online will not let cheapest product on the shelves? Or when the trade margin on the products range from 80% to 250%? Once while the Prosecutor General Chaika all over the country said that some retailers inflate the prices on food as much as 400%. In fact, the Prosecutor’s office is not only a public statement of facts, but also for action. Since that day, 5 years have passed, but no action followed. The liberal KGB state these margins are quite satisfied.

Fourth, the existing order of things passively support more or less wealthy citizens who believe that they “settled”. They are happy, including those that live better than tens of millions of compatriots who are below the poverty line. The philosopher Berdyaev once wrote that the worst enemy of freedom – fed and contented slave. Because, having received the coveted satiety, he painfully remembers the past, most of all afraid to be back in it and do not want any change, no talk about freedom, and to those who lead such conversations, be treated with serious hostility, and even with anger.

And finally, dissatisfaction and a large number of sane citizens is not the equivalent of the protest potential. Just the opposite. The poor and needy live in a state of frustration, depression. They are characterized by lethargy, dependency, victimization – victim complex. In psychology this state is called “syndrome of acquired helplessness”. The most that they are able to enter the area, something to shout angrily in unison and go home.

In this reality, with such public sentiments, Putin’s government is nothing seriously threatened. We can only predict that eventually such systems always come to a complete standstill under the yoke of the mounting problems and the unsolved basic problems. And actively prepare for such developments.