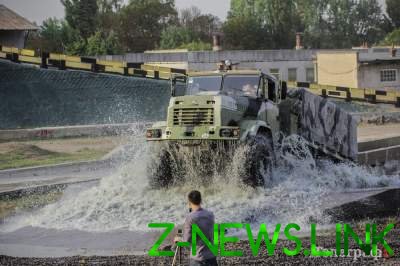 To the day of the machine engineer at the Kremenchug automobile plant showed armored vehicles KrAZ, and in a rather unusual way.

To the Day of Builder, which will be celebrated September 24, PJSC “AutoKrAZ” has shown an unusual show of cars for the factory workers and their families.

Armored KrAZ became participants of the antiterrorist operation. In the story, the action, the criminals took three hostages and demanded a car with a full tank of fuel. In the end they gave the car allegedly with fuel, it showed a twisted devices. In fact fuel in the tank was nothing at all. In the end, the criminals drove the special forces soldiers in an armored KrAZ Spartan.

Seconds and the terrorists were neutralized.