Home / Video news / The driver of the Rolls-Royce “failed” the car into the Ground. Video

The driver of the Rolls-Royce “failed” the car into the Ground. Video 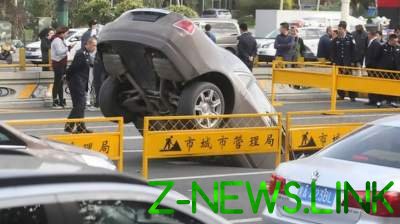 The car, whose price starts at 750 thousand dollars, was in an unusual accident.

Chinese driver behind the wheel of the car brand Rolls-Royce value 755 thousand dollars fell in a huge hole right in the middle of a busy street.

Dorozhno-transport incident happened in the capital of the Chinese province of Heilongjiang Harbin. The driver, being behind the wheel of a luxury car stopped at svetofore. Everything was fine until he pulled down on the green signal.

It was at this point on a busy city intersection a luxury sedan from the UK failed in the formed beneath the hole in the asphalt. Fortunately, owing to autoincident the driver was not injured. However, the car, despite the external signs, it went to great.

According to local media, from the failure externally, Rolls-Royce was damaged slightly, but due to technical problems not yet known whether fix.

A traffic incident is investigated by local police. The police find out that the driver of the car was with insurance, and whether he intended to file a lawsuit against the local authorities for inappropriate road surface.