The combined forces began to build fortifications in the Donbas 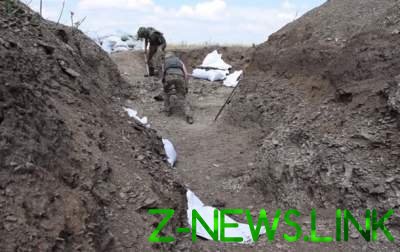 Strengthen military positions in the Donbas.

The headquarters of the combined forces showed how building fortifications for the Ukrainian military in a combat zone.

The soldiers of combined forces strengthen the first line of defense on the front line in the Donbass. On Monday, August 13, the press headquarters of the NFB in Facebook.

“Teams involved in the operation of the combined forces of increasing its power, is constantly the construction of shelters to prevent losses of the Armed forces of Ukraine”, – stated in the message.

“For the needs of the units that perform tasks in the area of operations of the combined forces already allocated over 2,800 cubic meters of timber, about 24 thousand of pieces of construction staples, 7588 kg of nails, more than 3800 running meters of film plastic and 12 tons of wire knitting,” said the CCA.

Note, in the past days, separatists 57 times opened fire on positions of Ukrainian troops, including 12 times with heavy weapons. Two Ukrainian soldiers were wounded Sunday and another on Monday.